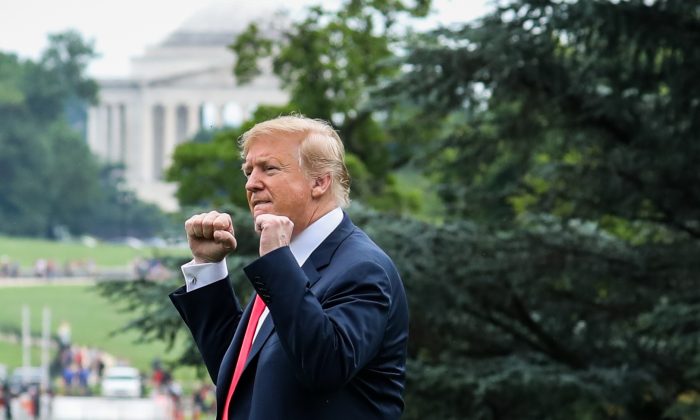 President Donald Trump before boarding Marine One on the South Lawn of the White House in Washington on June 27, 2018. (Samira Bouaou/The Epoch Times)
Trump Administration

President Donald Trump enjoyed a three-point improvement in his overall approval ratings over the course of a nearly monthlong barrage of negative reports by major media outlets covering his administration’s continuing enforcement of a Clinton-era policy of separating illegal alien children from people with whom they were apprehended.

According to a weighted average of approval polls maintained by RealClearPolitics, only 42.2 percent of Americans approved of Trump’s performance on June 8 and 53.6 percent disapproved, adding up to a gap of 11.4 percent.

By July 3, RealClearPolitics pegged Trump’s average approval at 43.3 percent and average disapproval at 51.8 percent, making for a gap of 8.5 percent.

Thus, the gap between Trump’s average approval and disapproval ratings shrunk by 2.9 percent during a month of relentlessly negative coverage on the illegal alien family separation issue.

Out of the 12,000 illegal alien minors in the custody of the U.S. government, 2,000 were separated from their parents as a result of the Trump administration’s enforcement of a Clinton-era court settlement agreement. Trump ended the practice of separating illegal alien minors from their families with an executive order last month.

Trump’s approval rating remains resilient despite an onslaught of negative coverage from major media outlets. According to the Media Research Center, 90 percent of evaluative statements about Trump on ABC, CBS, and NBC were negative in the first four months of 2018.

The resilience may be due to the fact that nearly 3 in 4 Americans believe that traditional news outlets often knowingly cover news “they know to be fake, false or purposely misleading,” according to an Axios/SurveyMonkey poll.

Two out of three Americans believe that the media reports fake news because “people have an agenda,” Axios found. Roughy one-third believe that the false news reports are the result of “poor fact-checking.” Only 3 percent said that fake news makes headlines by accident.