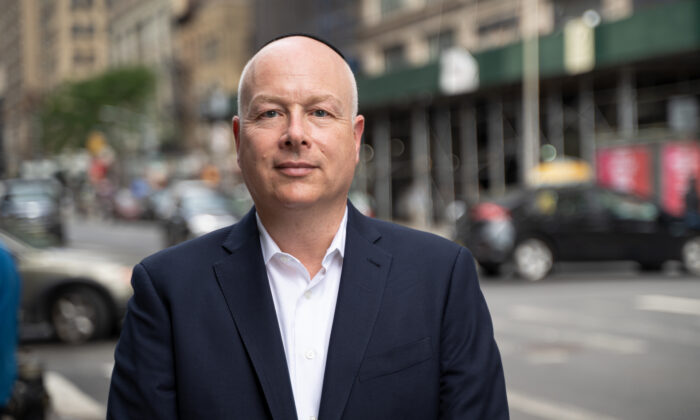 Jason Greenblatt, Special Envoy to the Middle East under President Donald Trump and author of "In the Path of Abraham: How Donald Trump Made Peace in the Middle East–and How to Stop Joe Biden from Unmaking It," in New York on Aug. 23, 2022. (Jack Wang/The Epoch Times)
Middle East

After having spent almost two decades with the Trump organization, Jason Greenblatt was tapped by President Donald Trump to be the White House Special Envoy to the Middle East. He played a key role in the Peace to Prosperity Plan, which aimed to resolve the conflict between Israel and the Palestinians, and Israel and the surrounding Arabic nations.

The Middle East peace team included Trump’s son-in-law Jared Kushner, U.S. Ambassador to Israel David Friedman, and Greenblatt. Their shared Jewish faith bought a cohesiveness to the group and was something their Muslim counterparts in every country could understand and respect, Greenblatt said.

“I should also stress, including from the Palestinians, that we may not have gotten along in certain key ways, we maybe didn’t see eye to eye on the conflict, but there wasn’t one who wasn’t respectful of me being Jewish,” Greenblatt said during a Sept. 8 interview for EpochTV’s “American Thought Leaders” program.

The diplomatic and political establishment criticized the fact that all three team members were Jewish and pro-Israel, and Friedman was the only diplomat, but Greenblatt said these factors only enhanced their effectiveness. The fact that the historic Abraham Accords were signed is a testament to this, he said.

The Abraham Accords are declarations of peace, tolerance, and freedom among the countries practicing the three Abrahamic religions: Christianity, Judaism, and Islam.

Israel’s diplomatic and economic relationships with the United Arab Emirates, the Kingdom of Bahrain, Sudan, and the Kingdom of Morocco have all improved since the accords were signed.

Greenblatt referred to the Abraham Accords as “normalization agreements” between Israel and some neighboring countries.

“What all of us had was the trust of Donald Trump,” he said, referring to the himself, Kushner, and Friedman. “We had a businessman’s approach and a legal approach, not a diplomatic approach. We were always diplomatic, but we weren’t constrained by years of diplomatic talks and certain talking points and rigid criteria by which people always felt this problem could be resolved.”

Although the signatory countries were not in any armed conflicts with Israel, there was a general hostility toward Israel. But after the accord was signed, these countries opened trade, travel, and communication with Israel.

“The life-changing experiences that people now have, because of the Abraham Accords, could really take your breath away,” said Greenblatt.

Greenblatt said there was an attitude among former U.S. officials, including former Secretary of State John Kerry, that there could be no peace in the wider Middle East until the Israeli–Palestinian conflict was resolved. But when Greenblatt traveled to these countries, there was more of an attitude that the Middle Eastern leaders wanted peace but didn’t know how to make it happen.

Greenblatt said that when they were in talks with the Palestinian leadership, the American delegation pointed out that the Middle East region was changing significantly. A younger generation was growing up, and the economies in several countries were moving away from oil and pivoting to technology.

The Palestinians had a choice to either join in the peace efforts or decline to participate.

“Unfortunately, the Palestinians chose to disassociate themselves with any of our efforts, and we just kept our heads down and kept working on it,” Greenblatt said.

In March 2017 after a meeting with many foreign ministers and the leaders of several Arab countries at the Arab League Summit, Greenblatt had a realization, a “light bulb” moment.

He wondered how it is that all these countries could be pro-Palestine and against Israel, “and yet [we] agree on, depending on the country, anywhere from 70 percent to perhaps as high as 95 percent of what was said in those rooms.”

Although all of the officials supported Palestine, many had frustrations with Palestinian President Mahmoud Abbas’s leadership, his inability to sit down and talk with Israel, and the terrorism in Gaza, Greenblatt said.

“That was almost the first time I thought, maybe there’s actually hope here, and the hope could rest with the leadership of the neighboring countries. Maybe they could support President Abbas, so he could be courageous and brave enough to engage with the Israelis.”

Even if Abbas in the West Bank had signed a peace deal, Hamas would not join the deal because it had vowed to destroy Israel.

In addition, Greenblatt said Abbas made unrealistic demands. For example, Abbas wanted all of East Jerusalem—which includes many Jewish holy places—to be given to the Palestinians and to serve as the Palestinian capital.

The Trump administration tried to engage with the Palestinian leaders with a plan to improve the region’s economy but that was rejected by the Palestinian authorities, Greenblatt said.

The Palestinian authorities boycotted a conference in Bahrain by dissuading neighboring countries to join and even arresting Palestinians who attended anyway, he said.

Palestinian officials were also angered when Trump moved the U.S. embassy to Jerusalem and withdrew completely from any peace talks. The Hamas terrorist group called an “intifada” (uprising) against Trump’s decision.

The Palestinian government in Ramallah restricts the freedoms of its own people and doesn’t allow a free press, said Greenblatt. And under Hamas, people are even more oppressed, because the authorities abscond many goods that come into Gaza, like concrete.

“It’s because Hamas takes that concrete, and instead of building schools and hospitals, they divert much of that to be used to build tunnels with which they then use to try to attack Israel,” Greenblatt said.

“And that’s not to say that Israel is perfect. There are imperfections in how the society works, largely because of the security troubles,” added Greenblatt.

As a consequence, Israel and Egypt have to restrict what they allow into Gaza.

In 2015, under the Obama administration, the United States and several other leading nations joined the Iran nuclear deal, formally known as the Joint Comprehensive Plan of Action (JCPOA). The deal was designed to temporarily limit Iran’s ability to develop a nuclear weapon in exchange for lifting the international economic sanctions that had severely hampered Iran’s economy.

After taking office, Trump terminated the Iran deal, saying it did not serve the interests or security of the United States. The Biden administration has attempted to reenter the plan, but negotiations with Iran have faltered.

During a June 13 press conference, U.S. Secretary of State Antony Blinken said the JCPOA has been renegotiated, but Iran has to decide if it will agree to the terms.

“What we’ve seen is Iran continuing to try to inject extraneous issues into the conversation, into the negotiation, that simply has no place there. So, they have to decide, and decide very quickly, if they wish to proceed with what has been negotiated and which could be completed quickly if Iran chose to do so,” said Blinken.

Getting an improved Iran deal is crucial to stability in that region and the world, said Greenblatt, and the deal the Biden administration will likely negotiate will be bad for the United States, he said.

“You think we have oil problems now, with what’s happening in Ukraine, between Ukraine and Russia? Imagine the kind of problems we’re going to have if stability and security in the Middle East are rocked with a deal that doesn’t make sense with Iran,” he said.

In a 2018 statement, the Trump administration said the Iran nuclear deal “enriched the Iranian regime and enabled its malign behavior, while at best delaying its ability to pursue nuclear weapons and allowing it to preserve nuclear research and development.”

If Biden signs a deal similar to the Iran deal executed under Obama, it will allow Iran to develop a nuclear weapon once the sunset clause takes effect, Greenblatt said.

“[The deal] gives Iran, as it did under the Obama administration, a huge fortune of money which they use to foment terrorism around the world, in particular in the Middle East,” he said.

A bad Iran deal will also embolden terrorist organizations like Hamas, said Greenblatt, which he described as “a puppet of Iran.”

“I think that Iran wants nothing more than to destroy Israel, and to take over those other countries and put their religious ideology into all of those Muslim countries, and then eventually attack the United States and maybe thereafter, Europe,” he said.

Many countries, after seeing the Biden administration’s dealings, are working to develop their own relations with Iran, said Greenblatt.

“They’re redeveloping ties with Iran. They’re potentially exchanging ambassadors again. What’s their choice?” said Greenblatt. “Because the reality is, if Biden is going to sign a deal, and we’re going to be left with this threat, you could either hope for the best or try to at least make it better under these new circumstances.”