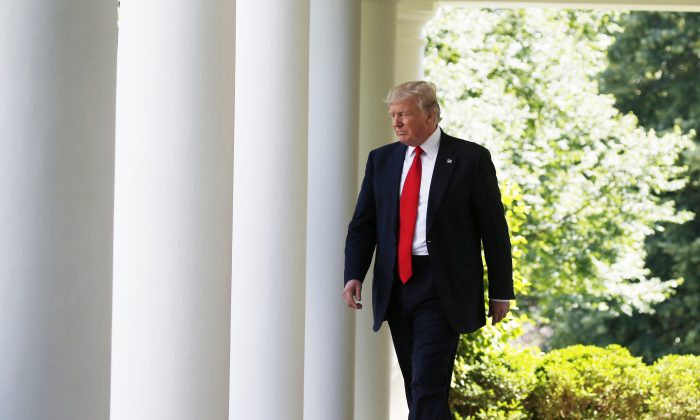 President Donald Trump arrives at the Rose Garden of the White House in Washington on June 1, 2017. (REUTERS/Joshua Roberts)
Trump Administration

The future of aviation is upon us, but we may not be ready. Commercial space travel and fleets of drones delivering freight will very soon vie for places in an increasingly crowded U.S. airspace—airspace that is being managed with 1960s technology. On June 5, President Donald Trump proposed a reform of our air traffic control system meant to bring it into the 21st century.

Reform will come through changing how air traffic control is managed. Instead of being run directly by the Federal Aviation Administration (FAA), air traffic control will be turned over to an independent, not-for-profit corporation directed by stakeholders and paid for with user fees, rather than taxes. The FAA will continue to oversee safety.

Trump’s proposal is built on, and aims to improve, the Aviation Innovation, Reform, and Reauthorization (AIRR) Act, introduced in the House in February 2016 by Rep. Bill Shuster (R-Pa.), chair of the Transportation and Infrastructure Committee.

Shuster’s bill was in turn inspired by developments in our neighbor to the north.

According to Marc Scribner, senior fellow at the Competitive Enterprise Institute, “the United States is the only major, industrialized nation that still has not separated its air traffic control services from its aviation safety regulator.”

The proposal for administering air traffic control through an independent, nonprofit corporation is modeled, Scribner said, on the example of Nav Canada, which began operating Canada’s service in 1996.

By separating its services from its safety regulator, Canada eliminated an important conflict of interest. Its aviation safety organization, like the FAA today, had been charged with overseeing air traffic control, so that the organization that provided the service judged its own performance. Since 2001, the U.N. International Civil Aviation Organization has designated splitting these functions as a best practice.

Nav Canada provides inspiration in other ways. It is developing the cutting edge technology to improve air traffic control, while reducing costs and improving efficiency.

Reports written for The Brookings Institution, The Heritage Foundation, the Hudson Institute, the U.S. Travel Association, and the Eno Center for Transportation, as well as inspector general’s and auditor’s reports, have faulted the FAA’s management of air traffic control.

Policy analyst Dorothy Robyn wrote in a 2008 Brookings report, “As a traditional government agency constrained by federal budget rules and micromanaged by Congress, the FAA is poorly suited to run what amounts to a capital-intensive, high-tech service ‘business.'”

In a June 5 letter to leaders of Congress, Trump wrote: “Political interference, budget uncertainty, and a bureaucratic government procurement system have continued to impede [the FAA’s] modernization efforts.”

The FAA’s NextGen program, which aims to implement a new satellite-based air traffic control system across the country by 2025, was originally estimated to cost $40 billion. “By the inspector general’s most recent estimates, however, it may cost an additional $80 billion to complete. By the time it is fully operational, the technology may already be obsolete,” said Trump.

Scribner explained that the FAA’s funding is subject to the whims of Congress, meaning that, especially in the era of sequestration and its automatic budget cuts, key air traffic control facilities may be threatened with being shut down, disrupting management and planning.

Robyn pointed out that Congress, in order to preserve jobs in a member’s district, micromanages the FAA by, for instance, refusing its requests to close obsolete facilities, thus saddling the agency with significant unnecessary costs.

Journalist Dan Reed wrote in a June 6 article for Forbes that the government’s “complex acquisition rules” prevent the FAA from “being able to acquire commercially off-the-shelf equipment, rather than having to wait a decade or more for the unnecessarily expensive, purpose-built equipment that nearly always results from” operating under those rules.

The NextGen initiative that Trump describes as being over budget and behind schedule would use satellites to manage planes using precise GPS locations. Nav Canada, heading an international consortium, has been the leader in developing this technology.

In fact, Nav Canada has developed a business selling its technology to other national air traffic control agencies.

In a 2015 Senate Commerce Committee hearing, the head of the U.S. National Air Traffic Controllers Association, Paul Rinaldi, said that Canada has “the air traffic controller, the engineer, and the manufacturer working together from conceptual stage all the way through to training, implementation, and deployment within their facilities. And what that does is it saves time and money.”

“[Canada is] developing probably the best equipment out there, and … selling it around the world. And they are doing it in a 30-month to three-year time frame, when we have to look much longer down the road because of our procurement process in this country,” said Rinaldi.

Trump’s principles and Shuster’s bill describe the makeup of the board that will govern the proposed corporation a little bit differently, but share the idea that this should be a collection of stakeholders, including members of the pilots’ and air traffic controllers’ unions.

These board members would have direct knowledge of the aviation industry and a direct stake in the successful outcome of the new corporation’s work. The corporation would have access to credit markets, allowing it to make prompt investments, as needed.

Robyn wrote that the funding of the corporation through user fees, rather than taxes, will cause airlines to change their behavior, making more efficient choices in how they serve routes.

Scribner said that NAV Canada’s adoption of funding through user fees has resulted, in inflation-adjusted terms, in a reduction of 45 percent in the costs for air traffic control over the last two decades.

He believes that the adoption of the Trump–Shuster proposal will lead to consumers seeing savings in time, fares, and fees.

Trump, in his statement of principles on the system, makes a general statement about how to achieve reform: “This proposal demonstrates that the federal government does not have to supply all of the resources required to develop and maintain our nation’s vast infrastructure. Often, it simply needs to remove obstacles hindering investment and innovation.”