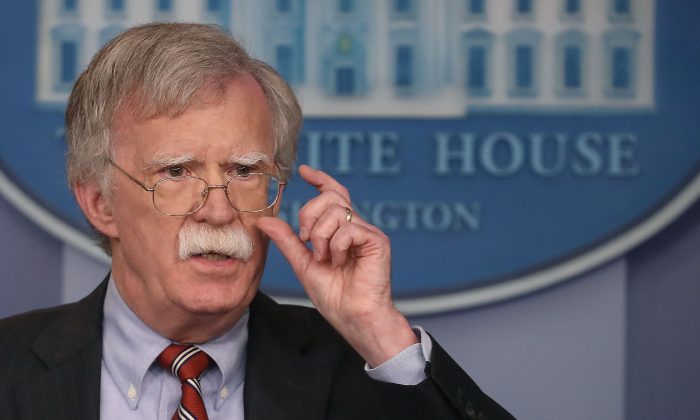 “The president is holding the door open for North Korea,” he told Fox News on Aug. 6. “He’s shown them the future they can have if they follow through on what they said in Singapore.”

Trump and North Korean leader Kim Jong Un met on June 12 in Singapore, where Kim reaffirmed a commitment to give up nuclear weapons.

The regime has destroyed its nuclear testing site and refrained from ballistic missile tests, but multiple reports have claimed it’s still continuing its nuclear program.

Bolton said U.S. Secretary of State Mike Pompeo was prepared to return to North Korea for another meeting with Kim. But in a sign that Trump’s patience may be strained, Bolton prompted the regime to act.

“What we really need is not more rhetoric,” he told Fox News, in another interview on Aug. 7. “What we need is performance from North Korea on denuclearization.”

He said the United States has lived up to the Singapore declaration, but “it’s just North Korea that has not taken the steps we feel are necessary to denuclearize.”

The U.S. State Department, however, still trusts that Kim ultimately wants to denuclearize.

“We do not believe that [Kim’s] position has changed in any way [since the Singapore declaration],” said Heather Nauert, State Department spokeswoman, during the Aug. 7 press briefing.

She said the department has expected the process to take time. “We knew that this would be a road,” she said.

Aug. 3 satellite images indicated that North Koreans had made progress on dismantling the Sohae Satellite Launching Station, which served for testing and development of engines for ballistic missiles and space launch vehicles, reported 38North, a North Korea analysis project of the Stimson Center, a think tank based in Washington.

Bolton said no additional Kim–Trump meeting was scheduled. The two leaders, however, have exchanged letters, Nauert said. She didn’t go into details regarding the content of Trump’s letter to Kim, which has been delivered to North Korean foreign minister Ri Yong Ho by U.S. Ambassador to the Philippines Sung Kim at the Association of Southeast Asian Nations meeting in Singapore on Aug. 4.

Trump posted on Twitter a letter from Kim on July 12, in which the dictator spoke of “the strong will, sincere efforts, and unique approach of myself and Your Excellency Mr. President aimed at opening up a new future between” the United States and North Korea.

Keeping the Pressure Up

Bolton said Kim can’t expect the United States to relax sanctions in response to words only and reiterated that the rest of the world needs to maintain pressure on North Korea, too.

“We’re not going to tolerate diminution of the effects of the sanctions,” he said.

U.S. Ambassador to the United Nations Nikki Haley criticized Russia on Aug. 3 for reportedly issuing work permits to thousands of North Korean laborers in violation of sanctions against Pyongyang.

Her remarks came out hours after the Treasury Department sanctioned a Russian bank for authorizing a significant payment on behalf of a North Korean living in Moscow who was sanctioned by the United States last year.

The White House has been adamant that the sanctions must remain until North Korea completely, verifiably, and irreversibly gives up its nuclear program. But it seems China and Russia, whose business mainly props up the North Korean regime, have relaxed their cooperation with the sanctions.

“For a time, both Russia and China appeared to be expelling North Korean workers well before U.N. deadlines, but more recent reporting suggests that North Korea may have again begun to dispatch labor to both countries,” stated an Aug. 2 report by the nonprofit research organization C4ADS.

China has recently agreed to fund new construction on the unfinished project of the New Yalu River Bridge connecting Dandong City in northeastern China with Ryongchon County, North Korea, insider sources told Japanese Kyodo News Agency on July 20. Chinese leadership decided to provide 600 million yuan (about $88.3 million) for a customs facility as well as a road that would allow vehicles to enter the bridge, which currently ends in a dirt field on the North Korean side.

The sources said China is also planning to negotiate with U.N. Security Council member states to ease economic sanctions on North Korea while it works toward denuclearization.

Gas prices fell dramatically in North Korea in July, suggesting that China and other countries are again sending oil into the isolated state, against U.N. sanctions.

Between 2015 and 2017, the Moscow-based Independent Petroleum Company (IPC) sold far more oil to North Korea than was officially reported, according to a recent report by the Seoul-based Asan Institute for Policy Studies.

“The amount of oil IPC sold to North Korea between 2015 and 2017 could be worth as much US$238 million,” the report estimated. “This far exceeds Russia’s official report on its oil exports to North Korea during the same period, which amounted to US$25 million.”

On Aug. 7, the North Korean foreign minister visited Iran and “discussed issues of mutual interest,” Iran’s Fars News Agency reported. A day earlier, the United States reimposed the first part of sanctions against Iran. The cooperation between Iran and North Korea has long caused concerns across the free world, as both countries have pursued nuclear and missile technologies and appear to have compared notes on them. Both countries have sent experts on such technologies to each other and even their missile designs look similar.