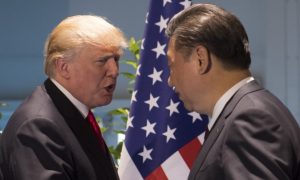 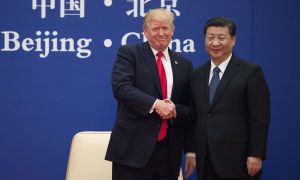 The US–China Phase One Fake Out
0 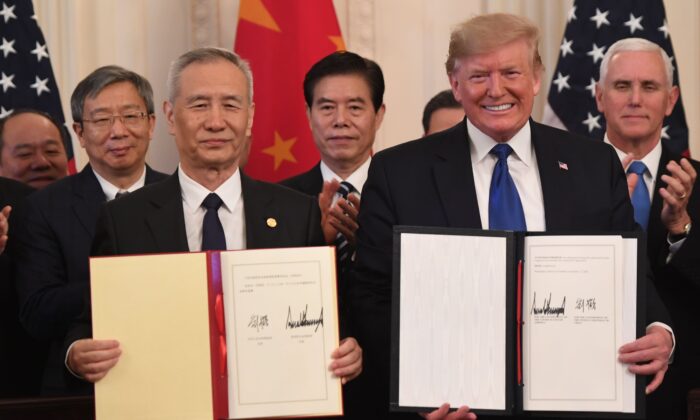 Chinese Vice Premier Liu He and President Donald Trump display the signed trade agreement between the United States and China in the East Room of the White House in Washington on Jan. 15, 2020. (Saul Loeb/AFP via Getty Images)
Thinking About China

How the Chinese Communist Party’s ‘Performance Legitimacy’ Has Fallen

A confluence of major events and poor decisions over the past several years have put the Chinese Communist Party (CCP) leadership in the crosshairs of the Chinese people’s blame and distrust. In the minds of many, including, perhaps, Party members themselves, the CCP is in danger of losing its claim to legitimacy.

In particular, China’s leadership is feeling the anxiety of performance legitimacy, or the lack thereof. And it’s all U.S. President Donald Trump’s fault.

Well, not really. Beijing has made some horrendous blunders in the past several years, and economic malaise had set in by 2015, well before Trump took office.

Still, Trump’s policies have made things much worse for the CCP. A broad and aggressive trade war has been an effective pushback against China’s “inevitable” economic and military rise. The Party leadership is rightly concerned about its future in dealing with this president.

Consider, for example, China’s performance failures of 2018, the year the trade war began. According to the China Academy of Information and Communications Technology, in 2018, smartphone sales were down 15.5 percent, and the China Association of Automobile Manufacturers reported that car sales were down by 4.1 percent. Worse, China’s trade surplus had dropped by 16.8 percent.

Add to these negatives the many unoccupied housing developments, high unemployment among university graduates, and the exodus of Western businesses and entrepreneurs. And then, of course, are the hundreds of billions in bad loans in the Chinese financial system (many financing unused development projects).

And then there is the growing unrest and impatience among workers. In 2018, there were at least 1,700 labor incidents, up from 1,200 in 2017. As a result, the Party leadership is looking for answers—or excuses—for these failures.

That’s why the “phase one” agreement is a welcome “win” for Beijing.

Phase One: A Temporary Fix?

But even the phase one deal is more of a band-aid than a solution. It halves the 15 percent tariffs on $120 billion worth of Chinese goods, halted tariffs scheduled to hit in December 2019 and took China off the currency manipulator list. This gives the CCP a much-needed relief that it can point to—at least temporarily. But 25 percent tariffs are still in effect on $250 billion worth of Chinese goods.

For the United States, it’s a good deal as well. China has agreed to buy $200 billion worth of U.S. goods—including $40 billion more in agricultural products—over the next two years. That would bring U.S. exports to China up to more than $260 billion in 2020 and about $310 billion in 2021. That’s significant, given that, pre-trade war in 2017, China purchased $185 billion from the United States.

There are additional wrinkles to the deal worth mentioning. For one, Chinese leader Xi Jinping sent his vice premier to sign the deal. Why? Xi loves the attention of signing big deals in Asia and Africa. Why skip the biggest deal of all?

There are several reasons, but primarily, Xi, as well as the people of China, know that it’s a win for the United States and a capitulation for China. Their economy is crashing as supply chains leave and Chinese lose their jobs. China needs relief from Trump’s tariffs and loses face getting it.

There’s also the probability that Xi knows he can’t hold up his end of the deal. Why sign a big deal with Trump only to be humiliated when you fail to deliver on it?

Better to send your No. 2 man to sign it. That way, when the deal goes sideways and the United States lays on the agreed punishment of more tariffs for nonperformance, Xi avoids the blame from the people and the Party. That’s his hope, anyway.

Will the phase one deal hold up? And if so, will it lead to a phase two, three, and other phases of deals?

Many observers think that phase one will not likely remain in force for long. Enforcement of the agreement itself remains an unresolved issue, especially on intellectual property protections and unfair subsidies to China’s state-owned enterprises. Both are sticky subjects for China and will likely be deal-breakers down the line.

For the CCP, the need to reverse the country’s economic trajectory is urgent. According to Deutsche Bank, GDP for 2020 is anticipated to fall below the 6 percent level, to about 5.8 percent. That’s the worst in 30 years and a political minefield for the CCP. Rising GDP is what the Party built its political legitimacy upon after the Tiananmen Square Massacre of 1989.

It’s no wonder China’s Vice Premier Liu He has responded to that low figure. First, they fired the statistician who reported falling growth. Then Liu pronounced that China’s 2020 GDP growth will surpass that key 6 percent level. He also promised that “China will continue to enhance the legal environment” and “welcomes investors from around the world.”

The fact that China is now allowing foreign financial services firms full ownership of offices shows how desperate Beijing is to stop their financial system from crashing. It’s also an admission of the CCP’s lack of financial finesse and need for foreign guidance.

Hong Kong Pulls the Curtain Back

But it isn’t just economic performance legitimacy that plagues the CCP. The Hong Kong crisis, now in its ninth month, demonstrates the Party’s lack of confidence in itself and its legitimacy.

Furthermore, Trump’s linkage of Hong Kong to a trade deal was a big blow to the CCP’s credibility. It destroyed any prestige or mystique the Party may have had with regard to its immunity from Western criticism and pressure.

Hong Kong also pulled back the curtain of legitimacy that surrounded the Party leadership. It revealed a leadership that has no clue about how to preserve the genius and value that Hong Kong has provided the mainland economy. It has also resulted in more mainland Chinese learning the truth about Hong Kong, and perhaps more critical, the truth about their own regime.

Taiwan Election: A Rejection of the CCP

Going hand in hand with the CCP’s Hong Kong protest disaster is the landslide re-election of anti-unification President Tsai Ing-wen. Other than a firm rejection of Beijing, there are two other notable facts about the Jan. 11 election.

First was the unusually high voter turnout, which saw 75 percent of voters this election. In the 2016 election, voter turnout was about 9 percent lower. Contrary to Beijing’s bluster, the Taiwanese people definitely showed their rejection of the idea of unification with the mainland.

Second, the high turnout was a result of high numbers of young voters. That, too, is a problem for Beijing. It may be that Hong Kong has taken the idealistic blinders from the eyes of young Taiwanese.

A Call for Multiparty Cooperation and Unity—Really?

It’s lonely at the top—especially when your performance isn’t living up to the hype. That’s about where the CCP leadership finds itself right now. Beijing’s ambitions are proving elusive to attain and its promises impossible to keep.

In light of China’s cratering economy, is it any wonder that the Party is now calling for multi-party cooperation and unity, as well as an end to extreme poverty? That isn’t very omniscient of a Party that’s all-wise and knowing, is it? Especially since it condemned multi-party systems in 2014.

It looks much more like a ploy to spread the blame of widespread and deepening leadership failure in order to avoid a performance legitimacy crisis—or worse.