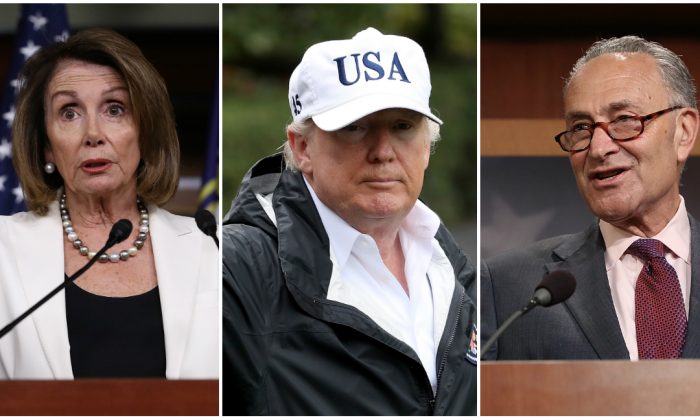 President Donald Trump says he is working on a deal with Democratic leaders to find a solution for Deferred Action for Childhood Arrivals (DACA), while at the same time ensuring “massive” border security.

Trump said a DACA plan is in the works, but stressed that there has to be “an understanding” about wall financing as part of any final agreement.

“No deal was made last night on DACA,” Trump tweeted on Twitter on Sept. 14. “Massive border security would have to be agreed to in exchange for consent. Would be subject to vote.”

On Sept. 5, Attorney General Jeff Sessions announced an end to DACA, saying the Obama-era policy, based upon an executive order, was unconstitutional, and the Department of Justice “cannot defend this type of overreach.”

On the same day, Trump said he would give Congress six months to come up with a permanent fix for DACA.

“I am not going to just cut DACA off, but rather provide a window of opportunity for Congress to finally act,” Trump said. He added that the legislative branch is responsible for writing immigration laws—not the executive branch.

Since June 2012, DACA has given almost 800,000 illegal immigrants a renewable, two-year reprieve from deportation, as well as work authorization and access to social security.

Trump has said he has “great heart” for DACA recipients.

“Does anybody really want to throw out good, educated and accomplished young people who have jobs, some serving in the military? Really!” Trump tweeted on Sept. 14.

Trump said part of the deal with DACA will be to have “massive border security.”

“And I think that both Nancy Pelosi and Chuck Schumer, I think they agree with it,” he said on Sept. 14.

Trump said on Sept. 13 that he and Congress are “fairly close” to a deal.

OPINION: Trump Is Right About DACA and Dreamers

Pelosi and Schumer issued a statement after the dinner with Trump, saying they agreed to support enshrining DACA protections into law.

“What remains to be negotiated are the details of border security, with a mutual goal of finalizing all details as soon as possible,” the statement said.

“While both sides agreed that the wall would not be any part of this agreement, the President made clear he intends to pursue it at a later time, and we made clear we would continue to oppose it.”

On Sept. 14 Trump said Speaker Paul Ryan (R–Wis.) and Majority leader Mitch McConnell (R–Ky.) are “very much on board” with a deal that would address DACA, but it must include “very, very powerful border security.”

Trump denied they were looking at citizenship for DACA recipients, but said, “we are looking at taking care of people. But number one we have to have a wall.”

Any new border fencing is on hold for now, aside from the repairs already underway.

“The WALL, which is already under construction in the form of new renovation of old and existing fences and walls, will continue to be built,” Trump tweeted on Sept. 14.

The average age of DACA recipients is 25 and those at the maximum age are now 36. Eighty-one percent of the recipients are Mexican, but some come from countries as far flung as Pakistan and the Philippines. Nine percent are citizens of El Salvador, Honduras, or Guatemala.

Forty-five percent of DACA recipients live in California or Texas, with New York, Illinois, and Florida rounding out the top five states.