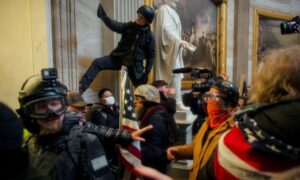 The logo of US social network Twitter displayed on the screen of a smartphone and a tablet in Toulouse, southern France, on Oct. 26, 2020. (Lionel Bonaventure/AFP via Getty Images)
Social Media

Trump Won’t Be Allowed Back on Twitter Again, CFO Confirms

Former President Donald Trump won’t be allowed on Twitter again after his account was banned last month, according to a company executive on Feb. 10.

Twitter permanently suspended Trump from the platform on Jan. 8, soon after the breach of the Capitol building. The social media website alleged that the former president’s final tweets had incited violence, although no criminal charges have been filed against him.

Currently, the former president is defending himself in the Senate’s impeachment trial, although the upper chamber isn’t likely to convict him. The Senate requires a 67-vote threshold to convict a president.

“Having to take these actions fragment [sic] the public conversation. They divide us. They limit the potential for clarification, redemption, and learning. And sets a precedent I feel is dangerous: the power an individual or corporation has over a part of the global public conversation,” Dorsey wrote on Twitter.

“I do not celebrate or feel pride in our having to ban [Trump] from Twitter, or how we got here. After a clear warning we’d take this action, we made a decision with the best information we had based on threats to physical safety both on and off Twitter. Was this correct?” Dorsey also wrote on Twitter around the same time Trump’s account was banned.

He added: “I believe this was the right decision for Twitter. We faced an extraordinary and untenable circumstance, forcing us to focus all of our actions on public safety. Offline harm as a result of online speech is demonstrably real, and what drives our policy and enforcement above all.”