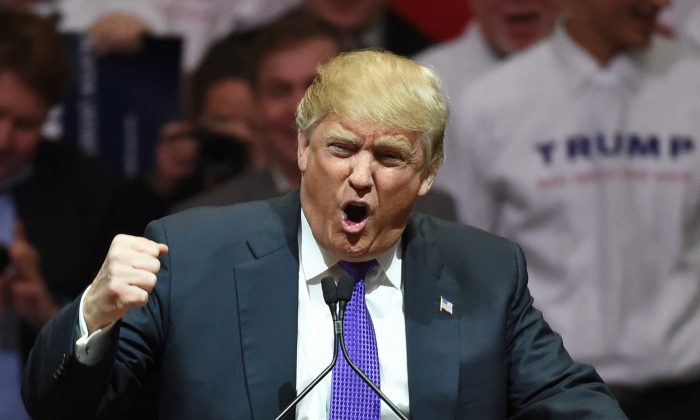 ATLANTA—Donald Trump added Georgia, Alabama, and Massachusetts to his string of Republican primary victories on Super Tuesday, while Hillary Clinton won the Democratic primary in seven state thanks to crucial support from African-American voters.

Georgians turned out in force to cast ballots for both parties’ presidential primaries on a day where 12 states were holding votes. The state had one of the largest delegate totals up for grabs, drawing last-minute visits from multiple Republican candidates including Trump and Sen. Marco Rubio.

About 6 in 10 GOP voters who said they wanted an outsider to be the next president went for Donald Trump. Joining them Tuesday at a library in Atlanta’s well-off Buckhead neighborhood was Ty McCain, who characterized his vote for Donald Trump as an “anti-establishment” choice.

McCain said he admired Trump’s early “self-funded” approach to the campaign. Trump initially made a personal loan to his campaign, and later began accepting contributions. McCain also said he doesn’t trust the other GOP candidates still in the race, particularly Marco Rubio.

“All these other guys are giving lip service to change,” McCain, a 47-year-old attorney, said. “Trump is putting his money where his mouth is.”

Mike Morrow wore a shirt depicting former U.S. President Ronald Reagan wearing an American flag headband as he exited the polls at a school in Smyrna on Tuesday after backing Trump.

Eric Tanenblatt, an Atlanta-based Republican consultant who hasn’t committed to a campaign since Jeb Bush’s exit, said he expects Texas Sen. Ted Cruz to do well in rural parts of the state, including north Georgia, while Rubio and Ohio Gov. John Kasich will battle for support in metro Atlanta and along the coast.

“I think you’re going to see that kind of division across the South, and Tuesday’s primary won’t clarify much,” Tanenblatt said.

Clinton’s victory over Vermont Sen. Bernie Sanders hinged on turning out the state’s large black population, which is a historically Democratic voting bloc. About 4 in 10 voters in Georgia’s Democratic primary were African-American, and about 8 in 10 of them favored Clinton. That mirrors her strong showing among black voters in South Carolina over the weekend.

Outside her polling place, St. Luke’s Episcopal Church, Althea Joefield of Atlanta said she wants to see what America would be like with a woman in the White House.

Jon Russell also wound up supporting Clinton— saying that while he actually prefers Sanders, he found Clinton better positioned to win the White House in November. Russell, a 69-year-old psychologist who lived in Australia for about 20 years before returning to the U.S. eight years ago to care for his ailing mother, said that experience made him more focused on foreign policy.

“I have trouble with trust,” Russell said, explaining his reservations about Clinton. “But unfortunately the other chap doesn’t have the foreign affairs experience.”

Bronwyn Robinson, who voted in Atlanta’s Candler Park neighborhood, ended up supporting Sanders. Robinson, who works as a neonatal intensive care unit speech pathologist, described herself as an independent voter who has supported Republican candidates but voted twice for President Barack Obama.

“I don’t think that Bernie can win, but it’s really a statement of support for something different looking at our country as a whole,” she said.