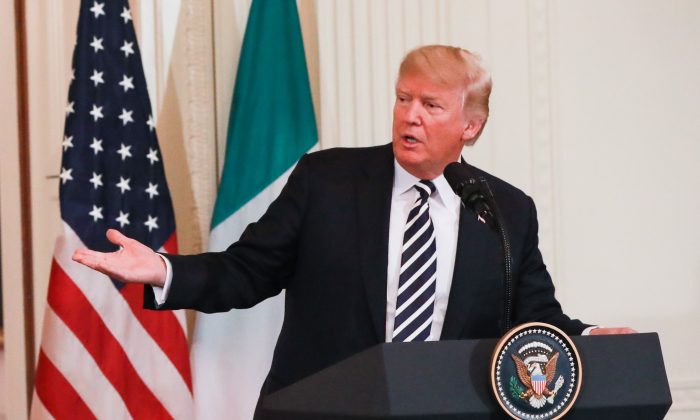 Trump Willing to Meet With Iran Any Time With No Preconditions

President Donald Trump said he’s willing to meet with the government of Iran without any preconditions and at its convenience.

“I would certainly meet with Iran if they wanted to meet. I don’t know that they’re ready yet,” Trump said. “They’re having a hard time right now.”

Trump has increased pressure on Iran to stop supporting terrorists and militias along with other threatening and destabilizing behavior in the region.

In May, Trump pulled out of the Iran nuclear deal that was signed by former President Barack Obama, who granted Iran up to $150 billion in sanctions relief and sent the regime $1.7 billion in cash.

Trump has since ordered the imposition of “the highest level” sanctions, some of which will go into effect on Aug. 6 and the rest—including key sanctions on oil, energy, and banking—on Nov. 4.

Rouhani even made a threatening remark to Trump, saying he shouldn’t “play with the lion’s tail” or he “will regret it.” Trump responded forcefully on Twitter, saying Rouhani should “never, ever threaten the United States again” or he will “suffer consequences the likes of which few throughout history have ever suffered before.”

Iran has been trying to preserve what’s left of the nuclear deal, officially known as the Joint Comprehensive Plan of Action (JCPOA), with the remaining signatories—Russia, China, the United Kingdom, France, Germany, and the European Union.

Violating the sanctions would put entities at risk of losing access to the U.S. banking system, though Trump’s State Secretary Mike Pompeo said the goal is to convince countries to stop buying the oil before the sanctions snap into place.

In early July, Rouhani threatened to block the Strait of Hormuz, saying that if Iran can’t export oil, no other country in the region will either. The strait is a choke point between the Persian Gulf and the Gulf of Oman through which about a fifth of the world’s oil shipments pass.

U.S. Central Command spokesman Navy Captain Bill Urban responded by saying the United States and its partners “stand ready to ensure the freedom of navigation and the free flow of commerce wherever international law allows.”

Rouhani followed up on the threat on July 22, saying, “We have a lot of straits; Hormuz is just one of them.”

Three days later, Saudi state oil company Aramco stated that two of its tankers have been attacked by the Houthi, Yemeni militants supported by Iran and suppressed by the Saudi military. The company stated it has temporarily halted all oil shipments through the Red Sea’s Bab El-Mandeb strait.

Regardless, Trump reiterated his belief that Iran will eventually come around.

The Trump administration had two main concerns with Obama’s JCPOA. First, that it included so-called sunset clauses, which would have allowed Iran to install thousands of advanced uranium centrifuges by 2026 and quickly develop a nuclear weapon. The other was that Iran’s ballistic missile development was not covered under the agreement.

The withdrawal from the agreement came after Iran was given months of opportunity to re-negotiate these parts of the deal.

Trump allegedly offered to meet Rouhani during the United Nations General Assembly in September. That would have been the first meeting between heads of the two countries since 1977. The White House never confirmed the offer, but Rouhani’s chief of staff, Mahmoud Vaezi, said Rouhani refused the repeated offer, according to state-controlled Iranian media.

Pompeo said on July 22 that the United States is willing to lift the sanctions, but listed 12 demands that the Iranian regime would have to meet first. Those included the end of its ballistic missile program, release of detained Americans, ending the support of terrorist groups and militias including Hezbollah, Hamas, and the Houthis, as well as withdrawing its forces from Syria. Cessation of threats to international shipping was also on the list.