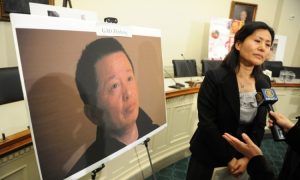 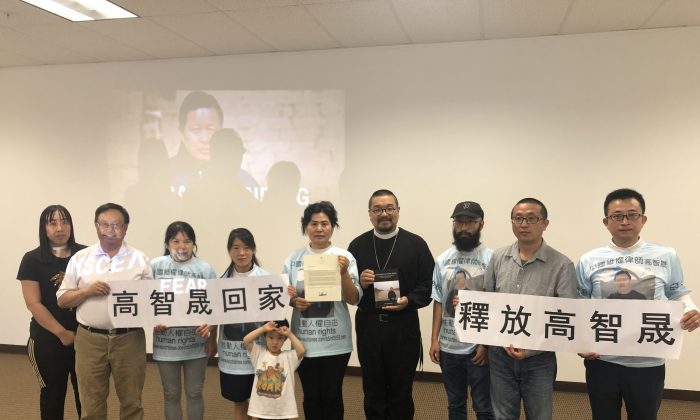 SANTA CLARA, Calif.—At an Aug. 11 afternoon press conference, the wife of Chinese lawyer Gao Zhisheng presented a letter from President Donald Trump stating his commitment “to oppose the forces of repression and radicalism.” Gao Zhisheng is a famous human rights advocate in China who has been missing since Aug. 12, 2017.

Gao’s family and international human rights organizations believe he has been arrested and jailed by the Chinese regime. His family hasn’t been able to contact him since his disappearance.

The president’s letter was written as a response to the Chinese Christian Fellowship of Righteousness (CCFOR). CCFOR is a San Francisco-based organization formed by a group of ethnic Chinese Christians to help persecuted Christians in China.

Gao, a devoted Christian, has been an outspoken critic of the Chinese government’s human rights violations and has represented underground Christian members, members of the spiritual discipline Falun Gong, and those dispossessed by Chinese government.

Underground Christian churches in China have been persecuted by the Chinese regime for many decades.

Falun Gong, also known as Falun Dafa, is a meditation practice rooted in ancient Chinese culture. Practitioners of the discipline have been persecuted by the Chinese regime since July 1999.

China’s fast economic development driven by the government has resulted in a huge population of farmers being relocated away from their original homelands, and the process often went without proper protections of farmers’ rights and interests.

Gao has been praised by international human rights organizations as being “China’s conscience,” and “China’s Mahatma Gandhi and Nelson Mandela.”

Trump’s letter, dated July 24, 2019, was written near the two-year anniversary of lawyer Gao’s disappearance. The letter was sent to Rev. Fr. Jonathan Liu, CCFOR’s signatory for the original letter to the White House.

In his letter, Trump said, “As president, I am committed to the advancement of freedom around the world, and will work to oppose the forces of repression and radicalism.”

The CCFOR had sent a letter to the White House on Dec. 10, 2018, asking Trump to “urge the Chinese government to release Gao Zhisheng so that he can be united with his family in the United States.”

Trump stated in his letter: “We stand—as we have always stood—with the victims of authoritarian abuses, terrorism, and genocide. We are allied with those who fight for liberty, justice, and the rule of law.”

The letter also stated: “We promote democratic institutions that respect human rights around the world because we know they enhance stability and security, and better harness the full capacity of their citizens.”

In the news conference, Geng He, Gao’s wife, said that her daughter and son only know what their father looked like more than 10 years ago. Geng hoped that Gao could be released and come to the United States to attend his daughter’s wedding and his son’s high school graduation.

Geng and her two children escaped China with the help of underground faith groups in January 2009, and came to the United States as political refugees. They have resided in Cupertino, California.

Geng mentioned in the news conference that she recently went to Hong Kong and participated the anti-extradition protest on July 1, which was joined by hundreds of thousands of people in Hong Kong.

In CCFOR’s letter, Liu stated that “Mr. Gao has suffered unimaginable torture, persecution, and all kinds of hardships for more than 10 years.”

Gao has been repeatedly detained, arrested, jailed, placed under house arrest, and reportedly “disappeared” by the Chinese communist regime since 2006.

International human rights groups and media have reported that Gao has suffered brutal torture at the hands of the Chinese regime’s security officials, including three years in solitary confinement in a room with no lights.

In 2001, Gao was recognized by China’s Ministry of Justice as one of the 10 best lawyers in the country for his work defending victims of medical malpractice and dispossessed landowners.

However, in 2005, Gao sent an open letter to Beijing’s leadership exposing the torture and inhumane treatment inflicted by the regime on practitioners of the spiritual practice Falun Gong. After that, Gao and his family were put under 24-hour police surveillance.

In November 2005, after Gao sent out his second open letter about Falun Gong legal cases, Gao’s law firm operations were suspended. Gao was arrested and was sentenced to three years in prison in September 2006.

After being released from prison, Gao continued his work on China’s religious freedom and human rights. He published the books “Unwavering Convictions” and “2016 Human Rights Report for China,” and drafted a constitution for a future China.

Additionally, in attendance of Sunday’s press conference was Li Aijie, the wife of Zhang Haitao. Zhang was a political dissident in China who openly criticized the Chinese regime’s persecution of Uighurs in Xinjiang province. Zhang was sentenced to 19 years in prison in January 2016.

Li said she received financial help of ¥8,000 ($1,143 [based on the current currency exchange rate]) from Gao after her husband was sentenced to jail. She later learned that the money was originally to be used for Gao to see dentists.

Gao lost most of his teeth at the age of 53 and reportedly suffers from other medical conditions as a result of years of physical and psychological abuse.

At the press conference, Rev. Fr. Liu urged the Chinese regime to release Gao, let him reunite with his family in the United Sates, and receive medical treatments.