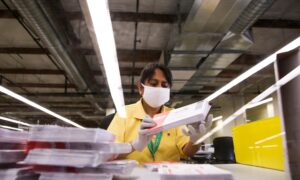 Gov. Mike DeWine (R-Ohio) said in an interview on ABC that he expects President Donald Trump will manage to clinch a narrow victory in battleground state of Ohio in the November presidential election.

DeWine said on Sept. 6 that while he believes Trump will emerge victorious, a win is by no means a foregone conclusion.

“It’s going to be a close race in Ohio. I think the president will win Ohio. But Ohio’s always going to be a battleground state. And you know, neither side can ever take Ohio for granted,” he added.

The governor cited satisfaction among Ohioans for the president’s policies on the economy and the judiciary as key factors that he expects will push Trump ahead of Democrat nominee Joe Biden.

In the 2016 election, Trump won Ohio by a comfortable margin of 8 percentage points. Democrats have since made gains in suburban areas, while Republicans have broadened their support in rural counties.

In July, Trump pitched a stern “law and order” message to suburban voters, accusing Democrats of seeking to “destroy our suburbs.”

Addressing a group of supporters in Phoenix, Trump pointed to the Seattle riots, which saw protesters force the shutdown of a police precinct and essentially take over part of the city, saying, “That’s exactly what will come to every city near you, every suburb and community in America, if the radical-left Democrats are put in charge.”

Trump later directly attacked Biden as being soft on crime and seeking to defund the police, charges that Biden has disputed. The White House hopeful wrote in an op-ed in June that, “I do not support defunding the police,” while in recent remarks in Pittsburgh, Biden said, “The senseless violence of looting and burning, and destruction of property—I want to make it absolutely clear, something very clear about all of this—rioting is not protesting, looting is not protesting, setting fires is not protesting,” he said. “None of this is protesting. It’s lawlessness, plain and simple. And those that do it should be prosecuted.”

Trump also blamed Biden for siding with “anarchists,” who the president has argued are responsible for hijacking legitimate protests.

“No one will be safe in Biden’s America. My administration will always stand with the men and women of law enforcement,” Trump said during his Republican nomination acceptance speech and blamed local Democrats for inaction in the face of riots.

In a counter-message to the president’s call for “law and order,” Biden accused Trump, whom he called “an incumbent president who sows chaos,” of seeking to “instill fear in America,” while claiming that Trump’s second term would see more violence roil the nation’s streets.

“Does anyone believe there will be less violence in America if Donald Trump is reelected?” Biden said. “He can’t stop the violence, because, for years, he has fomented it.”

In Sunday’s interview, DeWine also addressed also the question of mail-in-ballots in Ohio, saying that system in place allows voters to request an absentee ballot with no justification required.

“For many years, two decades I think, voters have been able to vote absentee with no reason. They can just ask for an absentee ballot,” he said, adding that every voter in Ohio is being sent an absentee voter application.

“The secretary of state tells me that we’re at least double over the requests that we normally would receive now,” DeWine said.

He expressed confidence that “things are going to work out fine as far casting the ballot,” but added, “we always have to be vigilant.”