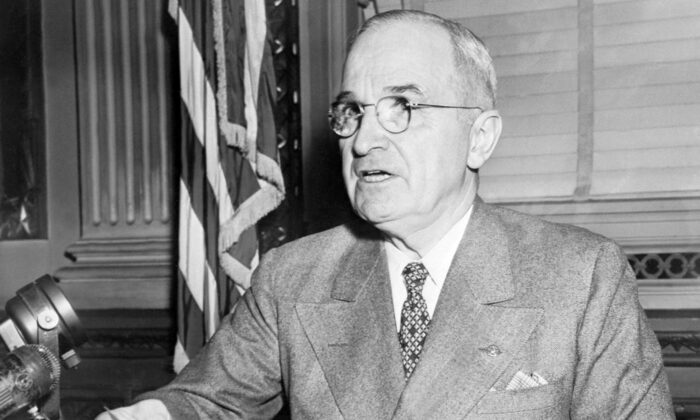 Trump Will Win by Giving Them Hell

President Donald Trump isn’t the first incumbent president to run for reelection facing a deficit in the late summer polls. At this stage of the election cycle in 1948, no one thought Democrat Harry Truman had a prayer of winning as he sank in the polls.

Newsweek magazine likened the Truman campaign in the month before the election to a “ship beating itself to pieces against a rocky shore.”

The “never Trumans” in the Democratic party were not much different from the Republicans’ never Trumpers, a group of neoconservatives who Trumpism has thrust into irrelevancy. In the election of 1948, Southern Democrats rallied around Dixiecrat and South Carolina Gov. Strom Thurmond, and Henry Wallace ran as a Progressive Party candidate.

In the last three months of the campaign, he adopted an ingenious strategy of running against the “do-nothing Republican Congress.” He fled Washington by train on his “whistle blow” tour through the heartland. He pitted the social and financial concerns of blue-collar Americans, farmers, and faith-based voters against the moneyed interests and deep-pocketed lobbyists on the East Coast. This, of course, led to the populist, “Give ’em hell, Harry” rallying cry of Middle America.

He warned voters that if they “stay at home” on Election Day, they would only “keep these reactionaries in power” and “deserve every blow you get.”

Trump should borrow this strategy from Truman. There is no economic or political gain from swimming in the swamp and negotiating a “fiscal stimulus” bill with the Democrats that will be larded up with special interest spending.

He should campaign against House Speaker Nancy Pelosi’s $3 trillion monstrosity of a “stimulus” bill containing goody bags, paid for by taxpayers, to every liberal special interest group imaginable. That bill stimulates nothing but Pelosi’s contributor list—from teachers unions to environmental lobbyists to trial lawyers to government workers. Americans are disgusted by the opportunism of Democrats—that they would dare use a public health crisis to fund union pensions, the National Symphony Orchestra, and environmental justice grants, whatever those are.

Trump is the modern-day Truman against a lifetime politician and his running mate, another lifetime politician—neither of whom have any business or job-creating experience. He could barnstorm around the country denouncing Democrat tax hikes and their obsession with issues such as climate change that would require strangling our energy industry. This would be cheered in China and Europe, but it would hobble America’s Midwestern industrial base and put millions of miners, drillers, truckers, construction workers, and other hard hats in unemployment lines.

The Democrats have been apologists for the rioters, gangs, looters, and anarchists who have burned down inner-city neighborhoods, harming the very minorities they say they want to help. Trump could win the election as the candidate of public safety alone.

The most populist issue of all is to fully open the American economy in a safe and effective way to reduce unemployment and get American families a paycheck. Democrats have defined themselves as the lockdown party.

Truman used to say: “I didn’t give them hell. I just told the truth, and they thought it was hell.” Trump’s special challenge is that, unlike Truman, he isn’t just up against a corrupt East Coast elite core of deep-state, deep-pocketed lobbyists and the wealthy social snobs who view Middle America as flyover country. He also must combat the bleed-blue media.

Given how unpopular the media is today, he can even turn the bias and blinding hatred at places such as CNN from a liability into an asset by again running against the fake news industrial complex. All of this is to say that voters need to be reminded daily that the left doesn’t just disdain Trump but also disdains the values and pro-America principles of Trump voters. Time to rile up the “deplorables” again, circa 1948 and 2016.