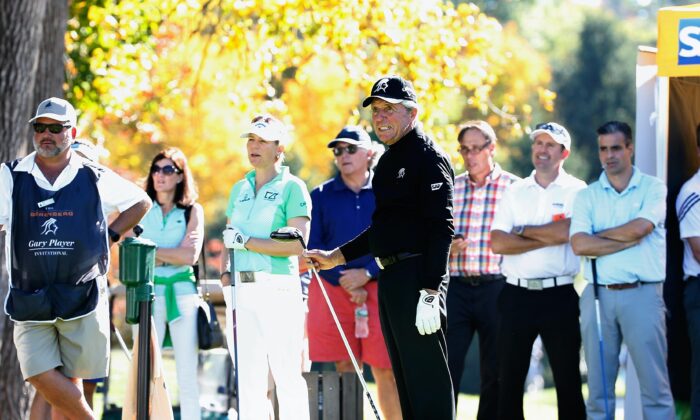 President Trump will bestow golfers Annika Sorenstam and Gary Player with the highest civilian honor, the Medal of Freedom, the White House announced on Friday.

The two players will be awarded the medals by President Trump at a special ceremony at the White House on March 23.

The Presidential Medal of Freedom and the Congressional Gold Medal are the highest honors a U.S. civilian can receive.

“This prestigious award is the Nation’s highest civilian honor, which may be awarded by the President to individuals who have made especially meritorious contributions to the security or national interests of the United States, to world peace, or to cultural or other significant public or private endeavors,” the White House’s announcement explains.

Sorenstam, 49, and Player, 84 will join the ranks of Tiger Woods, Arnold Palmer, Jack Nicklaus, and Charlie Sifford, becoming the fifth and sixth golf players to make it to the illustrious shortlist of those who have received the award.

Sorenstam, a Swedish native, is a 72-time winner and 10-time major winner on the Ladies Professional Golf Association (LPGA) Tour. She was also the first woman since 1945 to play in the (men’s dominated) PGA tournament, the Bank of America Colonial. She also received the titles of Associated Press Female Athlete of the Year and the Golf Writers Association of America Female Athlete of the Year.

“The world knows Annika on a first-name basis after her legendary 15-year professional golf career that broke world records and forever changed the way women’s golf is played,” the White House said in the announcement.

She will be the first female naturalized citizen to obtain the award. She is also the first LPGA player to receive the commendation.

“I am enormously grateful to the President for this honor and all it represents to me, to my family, to the LPGA and the ANNIKA Foundation. I am proud to be the first LPGA player and female athlete who is a naturalized American citizen to be recognized in this way. It is an overwhelming feeling. I am grateful, I am humbled, I am moved, and I am blessed,” Sorenstam wrote in an open letter on LPGA.com.

I can’t wait to head to the @WhiteHouse in a couple of weeks. Thank you! pic.twitter.com/cbwyOiPrAZ

Gary Player, 84, won the PGA Tour 24 times, nine of which were majors. He won 165 professional tournaments and is only one in five male players who have won a career grand slam. Player is the founding father of the Player Foundation, which raises funds for underprivileged children.