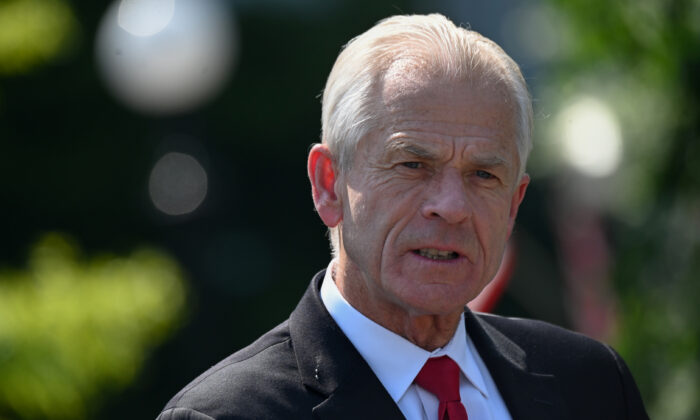 White House officials during the Trump administration pressured U.S. regulators to reauthorize a COVID-19 treatment and not impose certain guidance regarding emergency authorization requirements for COVID-19 vaccines, according to emails published by a House of Representatives panel on Aug. 24.

Officials sent a blitz of messages in 2020 to Dr. Stephen Hahn, the director of the U.S. Food and Drug Administration (FDA) at the time, regarding hydroxychloroquine, including requests to reimplement emergency use authorization for the drug.

Hydroxychloroquine, an anti-malarial, has shown some efficacy as a COVID-19 prophylactic and treatment, but other studies have found it has little or no effect.

Former President Donald Trump promoted the drug, citing a French study that found it was efficacious, and Dr. Deborah Birx, a top White House COVID-19 official, sent messages regarding the study to Hahn, the new report (pdf), from the House Select Subcommittee on the Coronavirus Crisis, shows.

The same day Birx sent one of the emails—March 28, 2020—and told Hahn, “We should talk,” the FDA granted emergency authorization for hydroxychloroquine and a related drug, chloroquine, for treating COVID-19.

The FDA on April 24, 2020, warned about using the drugs outside of hospitals and clinical trials and about two months later, revoked the authorization after several studies indicated the drug did not work against COVID-19.

After the decision, Peter Navarro, a White House trade and manufacturing official, and Dr. Steven Hatfill, a virologist who was helping the White House respond to the COVID-19 pandemic, launched an effort for hydroxychloroquine reauthorization that included drafting a public petition calling on the FDA to reauthorize it.

Navarro asked Hatfill to prepare an EUA request to the FDA, and Hatfill sent a draft of the request to Navarro on June 30, 2020, according to the select committee. Hatfill asked the Henry Ford Health System to submit the request, but to not mention the White House involvement. On July 1, 2020, the health system released a study that showed hydroxychloroquine worked against COVID-19. The system soon asked the FDA to reauthorize the drug for COVID-19 treatment.

The FDA denied the request in August 2020.

“As soon as we are able to thoroughly review this report, we will launch an investigation,” a spokesperson for Henry Ford Health told The Epoch Times in an email. “As part of our investigation, we will review allegations made about individual physicians named in the report and will take appropriate action. As always, the safety of our patients is our top priority.”

The system said its studies ultimately determined hydroxychloroquine was not an effective treatment for COVID-19.

Asked during a transcribed interview with the House COVID-19 panel whether pressure was ever applied inappropriately, Hahn said yes.

“There were discussions that I had with Mr. Navarro that I would say probably rose to the level of what you just asked me with respect to pressure,” he said, according to a partial transcript the committee released.

Navarro told The Epoch Times in an email that the FDA’s revocation of the emergency authorization and its refusal to reinstate it was not supported by scientific evidence.

“As shown by the use of hydroxychloroquine in other countries, this early use outpatient treatment offered an important key to interrupting the exponential spread of the virus and minimizing deaths in the United States,” he said.

After the FDA didn’t reauthorize hydroxychloroquine, Hatfill wrote to then-White House chief of staff Mark Meadows asking for Hahn and Dr. Anthony Fauci, another government official who opposed the drug, to be fired, according to an email included in the new report.

Drugs cleared for use in the United States can be used for different purposes, which is known as “off-label.” Hydroxychloroquine has been used throughout the pandemic by some U.S. doctors, but obtaining it became more difficult after the FDA warned about it and then revoked the authorization expressly for COVID-19.

The FDA, meanwhile, has been pressured by the Biden White House on other COVID-19 matters, including COVID-19 vaccine boosters.

An FDA spokesperson told The Epoch Times in an email that the agency’s actions have not been influenced by the White House.

“Throughout the pandemic, the FDA career staff has worked around-the-clock to make the best, science-based decisions on behalf of the American people in a rapidly evolving and unprecedented public health emergency,” the spokesperson said.

The panel also found that the Trump administration held up proposed FDA guidance to vaccine makers on emergency authorization.

The FDA in the summer of 2020 wanted to tell the manufacturers to submit data from phase three clinical studies that included a median follow-up of patients of at least two months duration after the completion of a primary vaccination series, a time period selected based on a review of “the literature and our own experience with when toxicities would manifest themselves,” according to Hahn.

But White House officials told the FDA not to issue the guidance, the report said, while Trump questioned it in public.

The FDA ultimately released the guidance, prompting Trump to accuse the FDA of “another political hit job” that would “make it more difficult for them to speed up vaccines for approval before Election Day.”

“The Select Subcommittee’s findings that Trump White House officials deliberately and repeatedly sought to bend FDA’s scientific work on coronavirus treatments and vaccines to the White House’s political will are yet another example of how the prior Administration prioritized politics over public health,” Rep. James Clyburn (D-S.C.), chairman of the House panel, said in a statement.