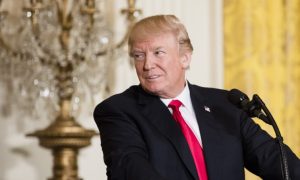 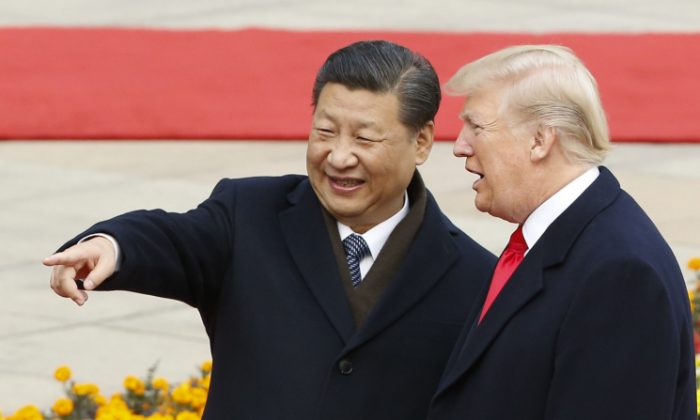 President Donald Trump said that the White House is “acting swiftly” to stem the tide of intellectual property theft and demanded that China come up with a plan to reduce its trade deficit with the United States by $1 billion.

Under the predecessors of Chinese leader Xi Jinping, China became the main perpetrator of intellectual property theft from the United States by encouraging the growth of a shadow industry which steals up to $5 trillion in value from the U.S. economy every year, according to a two-year investigative series by The Epoch Times.

“The U.S. is acting swiftly on Intellectual Property theft,” Trump wrote on Twitter on Wednesday morning. “We cannot allow this to happen as it has for many years!”

The president’s hint of forthcoming moves on intellectual property theft was one of three China-related tweets he sent on Wednesday. Trump, in one tweet, demanded that China reduce its trade deficit by $1 billion, and in another, lamented the loss of U.S. jobs and factories due to the policies of his predecessors.

“From Bush 1 to present, our Country has lost more than 55,000 factories, 6,000,000 manufacturing jobs and accumulated Trade Deficits of more than 12 Trillion Dollars,” Trump wrote in the first of three tweets. “Last year we had a Trade Deficit of almost 800 Billion Dollars. Bad Policies & Leadership. Must WIN again!”

“China has been asked to develop a plan for the year of a One Billion Dollar reduction in their massive Trade Deficit with the United States,” Trump wrote in the second tweet. “Our relationship with China has been a very good one, and we look forward to seeing what ideas they come back with. We must act soon!”

Trump indicated on Jan. 17 that he is considering imposing a big fine on China as part of a probe into China’s theft of intellectual property.

“We have a very big intellectual property potential fine going, which is going to come out soon,” Trump said.

Trump and his economic adviser, Gary Cohn, said China had forced U.S. companies to transfer their intellectual property to China as a cost of doing business there.

While Trump did not specify what he meant by a “fine” against China, the 1974 trade law that authorized an investigation into China’s theft of U.S. intellectual property allows him to impose retaliatory tariffs on Chinese goods or other trade sanctions until China changes its policies.

Trump said the damages could be high.

U.S. businesses say they lose hundreds of billions of dollars in technology and millions of jobs to Chinese firms which have stolen ideas and software or forced them to turn over intellectual property as part of the price of doing business in China.

Trump said he would be announcing some kind of action against China over trade and said he would discuss the issue during his State of the Union address to the U.S. Congress on Jan. 30.

Asked about the potential for a trade war depending on U.S. action over steel, aluminum, and solar panels, Trump said he hoped a trade war would not ensue.