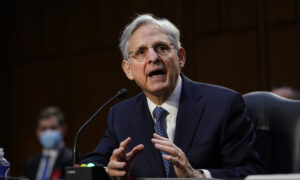 Former President Donald Trump on March 26 questioned the progress of the investigation by special counsel John Durham into the origins of the Russia investigation and the conduct of the government officials involved.

“Where’s Durham? Is he a living, breathing human being? Will there ever be a Durham report?” Trump wrote in a statement released by his office.

Durham is purportedly investigating a broad range of issues tied to the surveillance of the Trump campaign by the FBI. The investigation has so far led to the sentencing of a former FBI attorney who forged an email used in the process of obtaining a Foreign Intelligence Surveillance Act (FISA) warrant on Trump campaign adviser Carter Page.

The FBI spied on Page over the course of a year beginning in October 2016. An investigation by the Department of Justice Office of Inspector General (OIG) determined that the four FISA applications used to surveil Page contained 17 major errors and omissions implicating every official involved in the process, including then-FBI Director James Comey, then-Acting Director Andrew McCabe, and then-Deputy Attorney General Rod Rosenstein, among many others.

The findings by the OIG prompted the Foreign Intelligence Surveillance Court to issue a severe rebuke to the FBI, questioning why the bureau should ever be trusted with surveillance applications. The FBI has since committed to major reforms in how it vets the information used in FISA applications.

A dossier of unverified claims about Trump played a major role in the FBI’s decision to obtain the first FISA warrant on Page. All of the FISA applications contained claims from the dossier without disclosing that it was composed by a former foreign spy and paid for by the Hillary Clinton campaign and the Democratic National Committee. The bureau also failed to disclose that the dossier’s author, former British intelligence officer Christopher Steele, had an overt bias against Trump and was determined to prevent Trump’s election in 2016.

Steele’s sentiments didn’t differ much from some of the key FBI officials running the investigation of the Trump campaign, codenamed Crossfire Hurricane. The agent who opened and led the investigation, Peter Strzok, exchanged messages with his extramarital mistress at the FBI, attorney Lisa Page, expressing hatred for Trump and disdain for his supporters. Strzok spoke about stopping Trump from becoming president, discussed an “insurance policy” in the unlikely event Trump was elected president and mused about impeachment around the time he joined then-special counsel Robert Mueller’s probe.

More than a dozen top FBI and Justice Department officials involved in Crossfire Hurricane have either resigned or been fired.

The Epoch Times sent Durham a request for comment.