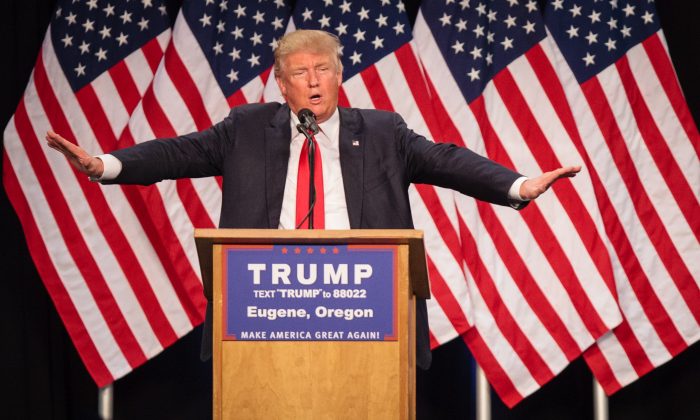 Trump: What Hillary Did to Her Husband’s Mistresses Was ‘Disgraceful’

Trump went after Hillary Clinton’s history of dealing with her husband’s mistresses at a campaign rally in Oregon on Friday, in response to charges that the presumptive GOP candidate is “bad for women.”

Democrats have run ads against Trump and Republican politicians who support him with super-clips of Trump’s remarks on women over the years, including appraisals of their physical appearance.

Trump said that Hillary should be the last person to attack Trump for being bad for women, given that “nobody in this country, and maybe in the history of the country politically, was worse than Bill Clinton with women.”

“[Hillary’s] been the total enabler. She would go after these women and destroy their lives,” Trump said. “She was an unbelievably nasty, mean enabler, and what she did to a lot of those women is disgraceful.”

Although Trump didn’t name any specific names, an Arkansas nurse whom Bill Clinton had allegedly raped in 1979 has returned from obscurity to tell her story in this election cycle.

“I’ve been quiet for too long, and now with the possibility of [Hillary Clinton] being the Democratic nominee and possibly president, I feel the need to get involved,” Juanita Broaddrick told the Hill in January.

The alleged rape has fallen outside of the statute of limitations, which means that Broaddrick has nothing to gain financially from resurfacing.

Trump continued this line of attack on Saturday, pressing on Bill Clinton’s impeachment trial during a rally in Spokane, Washington.

Trump touted all the women that were employed in executive positions at his company, and praised their work.

The remarks about Hillary Clinton begin at 3:30 in the clip below.