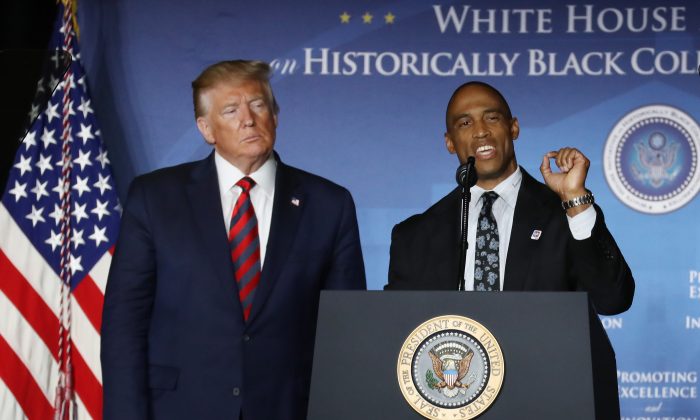 “You’ve seen this administration’s commitment—bigger and better and stronger than any previous administration, by far. So that’s very important,” he said.

Soon after taking office, Trump signed an executive order on HBCUs and vowed to make black colleges an “absolute priority.” He ordered more than 30 agencies to develop plans on how to make these institutions more competitive when seeking grants and other federal support.

“I signed legislation to increase federal funding for HBCUs by a record 13 percent. That was the highest ever done,” Trump said.

The White House initiative has resulted in the inclusion of HBCUs in the federal five-year STEM Education Plan and the federal Research and Development Budget Priorities, according to a report by Black Enterprise, a black-owned multimedia company. It also helped increase investment in HBCU programs under Title III of the Higher Education Act of 1965.

There are more than 100 HBCUs across the country, with most of them located in the South. The most notable ones include Hampton University in Virginia, Howard University in Washington, and Spelman and Morehouse colleges in Georgia.

HBCUs comprise 3 percent of all nonprofit colleges and universities and enroll 10 percent of all African American college students, according to the White House.

Trump said his administration took other actions during the last two and a half years to support HBCUs, including lifting the ban on Pell Grants for summer classes, fully forgiving disaster loans provided to black colleges devastated by Hurricane Katrina, providing capital finance loan deferment to 13 HBCUs, and increasing Howard University’s annual grant by $15 million.

At the event, Trump announced that faith-based HBCUs would start to see equal access to federal support.

Back to the White House

During his remarks, Trump also criticized the previous governments, saying that his administration is working hard to fix “decades of mistakes made by politicians in both parties.”

Speaking at the event, Scott Turner, executive director of the White House Opportunity and Revitalization Council, said the main objective of the opportunity zones is “the eradication of poverty in our nation.”

According to estimates, more than 1,800 people attended this year’s conference, held between Sept. 8 and Sept 10 in Washington.