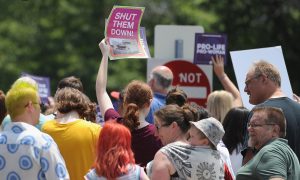 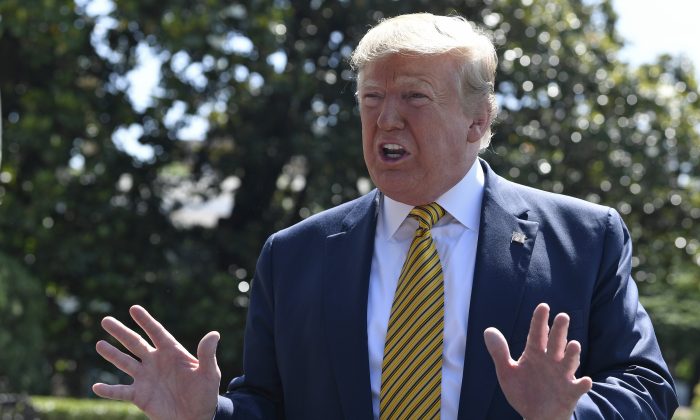 President Donald Trump speaks to reporters on the South Lawn of the White House in Washington on Saturday, June 22, 2019, before boarding Marine One for the trip to Camp David in Maryland. (Susan Walsh/AP)
Trump Administration

Trump: ‘We’re Not Going to Have Iran Have a Nuclear Weapon’

President Donald Trump reiterated on June 22 that his administration will work toward ensuring Iran gives up their nuclear weapon goals.

NEW: Pres. Trump says that sanctions hit Iran “hard,” and that “more sanctions are going to be put on”: “All I want is no nuclear weapons… we could have a deal with them very quickly, if they want to do it it’s up to them.” https://t.co/eaFkntNNpB pic.twitter.com/MJHrZZe5ZZ

Trump made the statements after he was asked by a reporter whether military action against the regime is still on the table.

“It’s always on the table until we get this solved,” the president said in response.

This comes after Iran brought down an unmanned U.S. Navy drone on June 19 that was flying over the Gulf of Oman and the Strait of Hormuz in what the U.S. military described as an “unprovoked attack.” Iran defended its actions, saying that the drone was on a spy mission over its territory, but the Pentagon countered that the aircraft was in international airspace.

Trump said he decided to pull back on a plan to carry out an immediate response after learning that it could cost the lives of 150 people, and said he didn’t think the response was proportionate.

He also said Iran was “very wise” to make a decision to not shoot down a manned U.S. spy plane that was reportedly flying close to the location where the drone was shot down.

“There was a plane with 38 people yesterday, did you see that? I think that’s a big story. They had it in their sights and they didn’t shoot it down. I think they were very wise not to do that. And we appreciate that they didn’t do that. I think that was a very wise decision,” Trump said.

Meanwhile, Trump also said he was open to renegotiating another deal with Iran. Iran is currently facing strong economic pressure after the United States withdrew from the Iran Nuclear Deal in 2018 and reimposed stringent sanctions against the Islamic country.

“Iran right now is an economic mess. They’re going through hell. The sanctions have hit them hard. More sanctions are going to be put on, a lot more,” Trump said. “All I want is no nuclear weapons. … We could have a deal with them very quickly if they wanted to. It’s up to them.”

“If Iran wants to become a wealthy nation again, become a prosperous nation. We’ll call it ‘Let’s make Iran great again.’ Does that make sense? Make Iran great again, okay with me. But they’re never gonna do it if they think in five or six years, they gotta have a nuclear weapon,” Trump also told reporters.

On June 17, the Iranian regime announced that it would breach an internationally agreed limit on its stock of low-enriched uranium after 10 days amid rising tension between the United States and the Islamic regime. It added that it would only remain in the nuclear deal, which was negotiated by the Obama administration in 2015, if its European signatories would step in to help the regime to circumvent the tight economic sanctions.

Longstanding tensions between the two nations became more prominent in recent weeks after the United States accused Iran of the June 13 attacks of a pair of oil tankers in the Gulf of Oman. The Trump administration has presented video evidence that seemingly implicates Tehran in the attacks, while Iran has denied having any role.

The Iranian regime said on June 22 that it would respond firmly to anything it deems a threat from the United States, according to semi-official Tasnim news agency, reported Reuters.

“Regardless of any decision they [U.S. officials] make … we will not allow any of Iran’s borders to be violated. Iran will firmly confront any aggression or threat by America,” Iranian Foreign Ministry spokesman Abbas Mousavi told the local media outlet.

Trump is at Camp David over the weekend in order to hold meetings and discuss the situation with Iran.