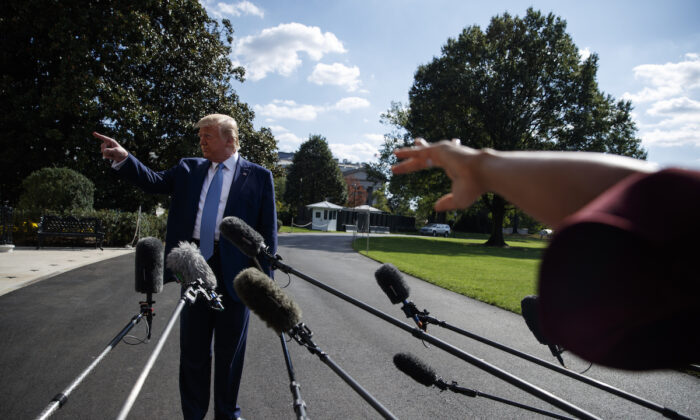 President Donald Trump reiterated on Oct. 4 that his request for Ukraine’s assistance to look into former Vice President Joe Biden was made to investigate alleged corruption rather than to look for information on a political opponent to help his campaign.

“Everything, to me, is about corruption. We want to find out what happened with 2016. And, as you know, there’s a lot of work going on, on that. I don’t care about Biden’s campaign, but I do care about corruption,” Trump told reporters at the White House on Friday, Oct. 4.

“What I want to do—and I think I have an obligation to do it, probably a duty to do it: corruption—we are looking for corruption. When you look at what Biden and his son did, and when you look at other people—what they’ve done,” he added.

Trump’s July 25 call with Ukrainian President Volodymyr Zelensky is at the center of an impeachment inquiry launched by House Speaker Nancy Pelosi (D-Calif.) last week. An alleged whistleblower filed a complaint about the call, claiming that the president was leveraging his office to obtain “dirt” on a political opponent—2020 Democratic candidate Joe Biden.

A day after Pelosi launched the impeachment inquiry, the White House released a transcript of the Trump-Zelensky call. The transcript revealed that Trump had asked Zelensky to look into Crowdstrike, a technology firm that was hired by the Democratic National Committee, and look into Biden’s dealings with Ukraine while he was vice president. In 2018, Biden bragged that he pressured then-Ukrainian President Petro Poroshenko in 2016 to remove a prosecutor in charge of a probe of Ukrainian gas company Burisma, where Biden’s son was a board member.

The president has repeatedly maintained that his phone call with the Ukrainian president was “perfect” and that he had asked Zelensky for help to investigate the alleged corruption around Biden’s dealings.

The commander-in-chief has also pointed out that it is his right as the president to investigate corruption and, as part of that duty, ask other countries to help the United States in various probes.

“As the President of the United States, I have an absolute right, perhaps even a duty, to investigate, or have investigated, CORRUPTION, and that would include asking, or suggesting, other Countries to help us out!” Trump said late Thursday.

As the President of the United States, I have an absolute right, perhaps even a duty, to investigate, or have investigated, CORRUPTION, and that would include asking, or suggesting, other Countries to help us out!

While speaking to reporters on Friday, he said that he was not interested in Biden’s campaign because he did not think the Democratic frontrunner had a chance at winning.

“We’re investigating corruption. We’re not investigating campaigns. I don’t care about his campaign. As I said, … I didn’t think and I don’t think Biden is going to win,” he said.

He also said that his administration will be sending a letter to Pelosi to reject congressional requests until she holds a vote to authorize the impeachment inquiry. Pelosi made the announcement to launch the inquiry but has not held a House vote, prompting Republicans to criticize her over it.

Earlier on Friday, Trump wrote: “As President I have an obligation to end CORRUPTION, even if that means requesting the help of a foreign country or countries. It is done all the time. This has NOTHING to do with politics or a political campaign against the Bidens. This does have to do with their corruption!”

As President I have an obligation to end CORRUPTION, even if that means requesting the help of a foreign country or countries. It is done all the time. This has NOTHING to do with politics or a political campaign against the Bidens. This does have to do with their corruption!

Marc Ruskin, a former assistant district attorney in New York and an adjunct professor in criminal justice who is also a regular contributor to The Epoch Times, said it was normal for countries to ask each other for help in criminal matters.

“What [Trump did] is ask them to conduct an inquiry to find out whether or not a crime had been committed in the past,” he told The Epoch Times. “And that is not only not wrong, it’s just the opposite. … It’s what countries do when they’re dealing with each other.”

Ruskin, also a 27-year veteran of the FBI and the author of “The Pretender, My Life Undercover for the FBI,” said he thinks the impeachment inquiry is “an end result in search of a vehicle.”

“They’re putting the cart before the horse, they have a goal in mind, which is impeachment, and the goal has been in their mind since before election night, essentially,” he said. “So what they’ve been looking for is a vehicle to allow them to reach that goal and impeach the president.”

Ruskin said that the Democrats essentially want to circumvent the democratic process while they “grasp at straws.” He used Rep. Al Green (D-Texas) as an example. Green told MSNBC in May that he was “concerned” that “if we don’t impeach the president, he will get reelected.”

“[Green] was saying that the President might be elected by to the democratic process, in other words, that he may be the choice of the American people and in order to circumvent that they need to impeach him,” Ruskin said. “So they want to circumvent the electoral process with their own judgment, rather than the will the people have expressed through elections.”