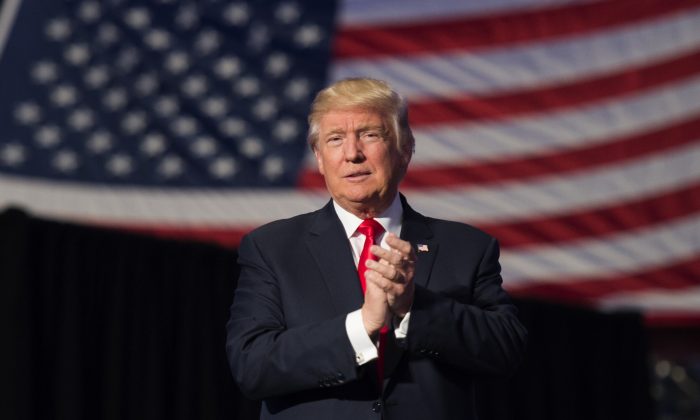 President-elect Donald Trump arrives to speak at a USA Thank You Tour 2016 at the Giant Center in Hershey, Pennsylvania on Dec. 15, 2016. (DON EMMERT/AFP/Getty Images)
Politics

WEST PALM BEACH, Florida—After months of promising to engage more with Russia, President-elect Donald Trump vowed to enhance America’s nuclear capabilities, admonishing Russian President Vladimir Putin on Friday that he hopes both global powers can restore collaboration so that “we do not have to travel an alternate path.”

Trump passed along a “very nice letter” that his transition team said was sent to him by Putin urging Trump to act “in a constructive and pragmatic manner” to “restore the framework of bilateral cooperation.”

The letter, dated Dec. 15, also notes that serious global and regional challenges “show that the relations between Russia and the U.S. remain an important factor in ensuring stability and security in the modern world.”

In response, Trump said that Putin’s “thoughts are so correct,” and that he hopes “both sides are able to live up to these thoughts, and we do not have to travel an alternate path.”

Putin spokesman Dmitry Peskov confirmed that Putin sent the letter, “voicing hope for an improvement of bilateral ties,” according to the Interfax news agency. Trump’s transition team described the text as an unofficial translation.

The exchange comes on the heels of comments by Trump and Putin alike about the need to strengthen their countries’ nuclear arsenals. Trump reopened the debate over nuclear proliferation Thursday, declaring on Twitter that the U.S. should “greatly strengthen and expand its nuclear capability” until the rest of the world “comes to its senses” regarding nuclear weapons. Those comments echoed an earlier statement by Putin, who said earlier Thursday that strengthening his country’s nuclear capabilities should be a chief military objective in the coming year.

But Putin downplayed the significance of Trump’s comments at a marathon end-of-year news conference Friday. Putin said he sees “nothing unusual” in Trump’s pledge to strengthen the U.S. nuclear forces, saying the statement is in line with the president-elect’s campaign promises.

In his wide-ranging remarks, the Russian leader claimed that his country’s military is stronger than that of any potential aggressor, but acknowledged that the U.S. military is bigger. He also cast the modernization of Russia’s nuclear arsenals as a necessary response to the U.S. missile defense system.

Trump extolled Putin’s leadership during the campaign and called for a tempered approach to U.S.-Russia relations. And while Putin had described Trump in favorable terms during the campaign, observers say Russia’s interest is centered around winning relief from crippling sanctions implemented under the Obama administration and bolstering Russia as the political and economic equivalent of the United States.

Tensions have been mounting between the U.S. and Russia in recent months over accusations by the Obama administration that the Russian government hacked the emails of U.S. citizens and institutions, including political organizations, and handed them over to DCLeaks.com and WikiLeaks for distribution. The FBI said this month that it supports the CIA’s conclusion that Russia interfered in the presidential election with the goal of supporting Trump.

Trump has repeatedly dismissed claims that Russia sought to usher in his victory, but his remarks indicate that Russia may not be an exception to Trump’s vow to assert American influence through “unquestioned military strength.” His comments are prompting fears of a nuclear race in the making if Trump breaks longstanding nuclear treaties, and if Russia or other countries seek to counter American nuclear gains.

Earlier this year, Trump said, with regard to the decades-old U.S. policy of refusing to rule out being the first to use nuclear weapons, “I would certainly not do first strike.” He also said, “I can’t take anything off the table.”

Putin Hopes to Fix Ties With US, Pool Anti-Terror Efforts

Outgoing Defense Secretary Ash Carter has also said the Pentagon plans to spend $108 billion over the next five years on its commitment to correct decades of shortchanging its nuclear force. He accused Russia in September of “nuclear saber-rattling” and North Korea of nuclear and missile provocations.

Trump’s spokesman said Friday the president-elect is putting other countries on notice. “It was in response to a lot of countries. Russia, China and others are talking about expanding their nuclear capability,” spokesman Sean Spicer said on Fox News.

Trump spent Friday in West Palm Beach, where he spends most holidays. In the morning, he played 18 holes with golf champion Tiger Woods at the Trump International Golf Course, and he was set to hold high-level staff meetings later in the day, his transition team said.

The president-elect took to Twitter early Friday, declaring it a “ridiculous shame” that his son Eric will have to stop soliciting funds for his charitable foundation, the Eric Trump Foundation, because of a conflict of interest. Eric Trump had said Wednesday he made the decision to avoid the appearance of a conflict.

My wonderful son, Eric, will no longer be allowed to raise money for children with cancer because of a possible conflict of interest with…

my presidency. Isn’t this a ridiculous shame? He loves these kids, has raised millions of dollars for them, and now must stop. Wrong answer!

“My wonderful son, Eric, will no longer be allowed to raise money for children with cancer because of a possible conflict of interest with my presidency,” Trump tweeted. “He loves these kids, has raised millions of dollars for them, and now must stop. Wrong answer!”