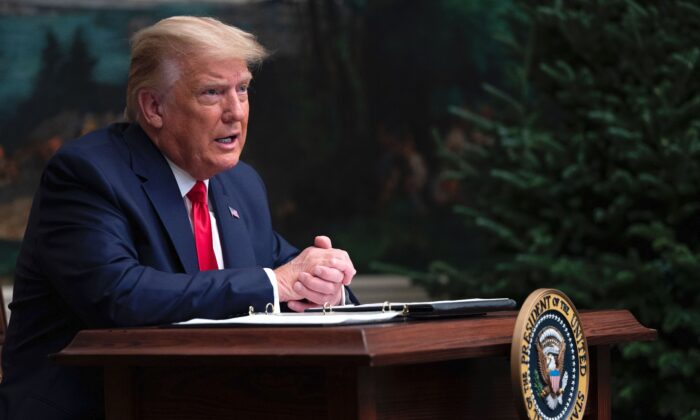 President Donald Trump speaks to reporters after participating in a Thanksgiving teleconference with members of the United States Military, at the White House on Nov. 26, 2020. (Andrew Caballero-Reynolds/AFP via Getty Images)
Donald Trump

Trump: ‘We Don’t Have Freedom of the Press’ Due to ‘Suppression by the Press’

President Donald Trump said in a Nov. 29 interview that freedom of the press in the United States is being eroded by mainstream news outlets.

The president was asked several questions about alleged election fraud and how corporate media outlets are covering it.

“The media doesn’t want to talk about it. They know how fraudulent this is. It’s no different than Hunter,” he said, referring to Democrat candidate Joe Biden’s son Hunter Biden’s overseas business ties that were the focus of scrutiny weeks ahead of Nov. 3. “They don’t want to talk about Hunter, so they totally closed it off, Big Tech and the media, other than the New York Post, as you remember, which took a lot of heat. It was terminated. It was terminated from, I guess, Twitter, maybe Facebook.”

The Post published a story, citing data obtained from a laptop allegedly owned by Hunter Biden, that claimed the younger Biden tried to set up a meeting between his then-vice president father and a businessman associated with Ukraine’s Burisma Holdings, a company that has long been accused of corruption. Biden’s campaign in October disputed that the meeting ever took place, while the former vice president had earlier denied he knew anything about his son’s business dealings in Ukraine, China, and Russia.

Trump said, “We don’t have freedom of the press in this country; we have suppression by the press.

Since Election Day, legacy media have typically tried to downplay, or opted not to report at all, allegations of fraud from Trump and his legal team.

Even Fox News, a website and broadcaster that frequently interviews Trump, has faced scorn from the president and conservatives for calling the race early in Arizona on Election Night. Since then, the president has touted other news outlets such as OANN and Newsmax.