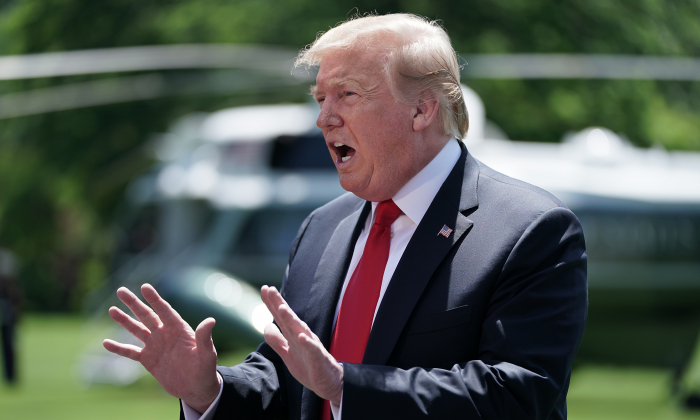 President Donald Trump talks to reporters while departing the White House May 24, 2019 in Washington. (Chip Somodevilla/Getty Images)
US News

Trump: ‘We Are Going to Do Something Very Dramatic’ at US-Mexico Border

President Donald Trump said that his administration was set to take major action at the United States-Mexico border.

“We are going to do something very dramatic on the border,” he told reporters in Washington on May 30 before boarding Marine One. “I would say my biggest statement yet” would be made, he added.

The statement would be issued either later Thursday or sometime Friday, the president said.

.@POTUS teases a “major statement” on the border either today or tomorrow. “We’re going to do something very dramatic on the border.” Says he’s not closing the border but it will be his “biggest statement.” pic.twitter.com/4l1d9NoE1p

“I’m not closing the borders, I’m doing something else,” he said, adding that the statement “will have to do with people crossing the border illegally.”

He said he was being forced to take action because “the Democrats will not give us laws” and “will not do anything.”

“They want to have open borders” with crime and drugs pouring in, he added, along with human trafficking.

Trump was slated to go to Colorado and speak at the Air Force Academy’s graduation ceremony.

A federal judge who ruled against President Donald Trump using Defense Department funds to build additional border fencing on May 24 donated to former President Barack Obama—the third Democrat donor judge to rule against the Republican president in a week.

U.S. District Court Judge Haywood Gilliam Jr. was confirmed in 2014 after being nominated by Obama and receiving a recommendation by Sen. Dianne Feinstein (D-Calif.). Gilliam was in private practice for nearly a decade at the law firms of Bingham McCutchen and Covington & Burling before being nominated.

According to federal election records, Gilliam donated $6,900 to Obama’s campaign for president—$4,600 to Obama for America and $2,300 to the Obama Victory Fund.

Gilliam donated additional funds to Obama’s re-election campaign, sending $13,500 to Obama for America and Obama Victory Fund 2012. He also donated $4,500 to the Democratic National Committee. From 2012 to November 2014, he sent $3,100 to the Covington and Burling LLP PAC.

The donations started in 2007, just one year after he served as an assistant U.S. attorney in the Northern District of California. They ended after Gilliam started serving as a U.S. district judge.

Gilliam said during his confirmation hearings (pdf) that judges should be impartial. “I believe that the most important attribute of a judge is the commitment to faithfully and impartially apply the law in every case, without regard to the type of matter or the identity of the parties. I do possess this attribute.”

The two other judges who recently ruled against Trump also have a history of donating to Democrats.

Trump has continued to note the background of some judges ruling against him, hitting out at U.S. District Judge Amit Mehta—who donated thousands to Obama—after Mehta’s recent ruling.