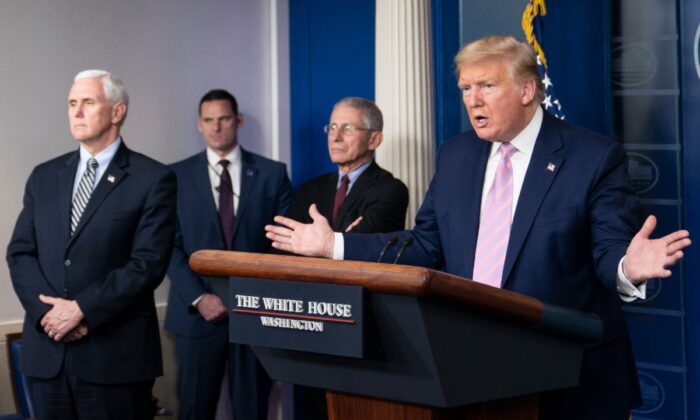 President Donald Trump has asked Americans to brace for a big spike in fatalities from the CCP virus in the coming weeks, as the country faces what he says may be the toughest two weeks of the pandemic.

“There’s going to be a lot of death, unfortunately,” Trump said during a somber start to his briefing with reporters.

He urged certain media outlets to “stop spreading false rumors and creating fear” during the national emergency because it is “essential” that national leaders be able to cut through the “fog of confusion in order to follow the facts and the science” in the battle against the CCP (Chinese Communist Party) virus, commonly known as the novel coronavirus.

Trump said that tight coordination between state and federal government is needed to ensure that all available ventilators in the Federal Emergency Management Agency’s (FEMA) strategic national stockpile are in use and not wasted as the country nears its predicted peak caseload of infections.

“It’s very understandable that officials would seek to get the most they can get for their communities,” he said of the requests his administration has received for ventilators. “But the fears of shortages have led to inflated requests.”

Governors are asking for more machines than they are using, the president said.

“Wherever local shortages are reported, we’re asking states to immediately meet the demand.”

He added that with faster data-sharing from the states, the White House Coronavirus Task Force would be working to coordinate equipment levels with the hope of staying several days ahead of critical medical needs in each state.

“Let me be extremely clear about one point, we will move heaven and earth to safeguard our great American citizens,” Trump said.

President Trump: “So, let me be extremely clear about one point, we will move heaven and earth to safeguard our great American citizens.” #CCPVirus

More than 306,000 people have now tested positive for the CCP virus in the United States and over 8,300 have died, according to a Reuters tally.

White House medical experts Dr. Anthony Fauci and Dr. Deborah Birx, who is coordinating the coronavirus response, have forecast that between 100,000 to 240,000 Americans could be killed in the pandemic, even if social distancing rules are followed.

“We are coming up to a time that is going to be very horrendous,” Trump said at the White House. “We probably have never seen anything like these kind of numbers. Maybe during the war, during World War I or II or something.”

In the grimmest day yet for New York state, which has been hit hardest by the pandemic, coronavirus-related illnesses killed 630 people in the last 24 hours, Governor Andrew Cuomo said on Saturday.

The disease has now killed 3,565 people in New York and the situation is particularly worrying on Long Island, east of New York City, where the number of cases “is like a fire spreading,” Cuomo told a news conference.

Health experts calculate that New York, home both to bustling Manhattan and hilly farm country stretching to the Canadian border, might be around a week away from the worst point in the now-global health crisis.

“We’re not yet at the apex, we’re getting closer … Our reading of the projections is we’re somewhere in the seven-day range,” Cuomo said.

“It’s only been 30 days since our first case,” he said. “It feels like an entire lifetime.”

New York City alone accounted for more than a quarter of the U.S. CCP virus deaths tallied by Johns Hopkins University from official government data. Hospitals and morgues in the city are struggling to treat the desperately ill and bury the dead.

Cuomo said that the state of Oregon had volunteered to send 140 ventilators to New York’s hot spots that are in need.

Following discussions on March 27 between President Donald Trump and Chinese leader Xi Jinping, Beijing, the Joe and Clara Tsai Foundation, and Jack Ma, who along with Tsai founded Chinese multinational e-commerce giant Alibaba, also offered to send 1,000 ventilators to New York that will arrive at JFK airport on Saturday, a source familiar with the discussions said.

Meanwhile, the CCP has continued with its global disinformation efforts to deflect blame over the regime’s initial mismanagement and coverup of the global pandemic, which started in Wuhan.