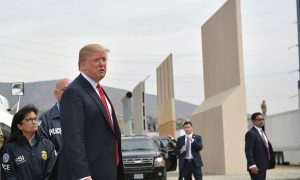 President Donald Trump has set a deadline of Nov. 3, 2020—Election Day—for completion of a wall that he has vowed to build along the southern border.

Meanwhile, he declined to estimate when the partial shutdown of the federal government will end, maintaining his demand that Congress approve more money for the wall project.

“I can’t tell when the government’s going to be open. I can tell you that it’s not going to be open until we have a wall or fence, whatever they’d like to call it,” Trump told reporters on Dec. 25 at the White House. “I’ll call it whatever they want. But it’s all the same thing. It’s a barrier from people pouring into our country, from drugs, … human trafficking.”

The border wall was one of Trump’s signature campaign promises, which he said is necessary to ensure border security, and prevent unvetted people from coming across illegally.

Leading Democratic lawmakers have dismissed the wall as ineffective and unnecessary, although many of them voted for expanding a border barrier in the past.

In the book “Crippled America,” published during the presidential campaign, Trump wrote: ” I will build a great wall on the southern border. It doesn’t have to cover the entire border. Some areas are already secured with physical barriers. In other areas, the terrain is too difficult for people to cross.”

In his remarks at the White House, Trump took a similar approach.

“It’s a 2,000-mile border, but much of it has mountains and region you can’t get across,” Trump said. He indicated he would consider the wall complete at the length of 500-550 miles.

Trump pointed to the contract for construction of 115 miles of a border barrier in Texas that he approved on Dec. 24. He said he’ll visit the start of construction in late January, noting that some parts of the planned barrier will be 30 feet high.

“There may be the case of an Olympic champion who can get over the wall, but for the most part, you are not able to do it,” he said.

Another part of the barrier has already been built or renovated in the San Diego area.

“So while we’re fighting over funding, we’re also building. And it’s my hope to have this completed—all 500-550 miles—to have it either renovated or brand new by election time,” he said.

About one quarter of the federal government shut down on Dec. 22, after the slight Republican majority in the Senate couldn’t get Democrats on board with the wall funding, thus failing to pass one of the government spending bills. The shutdown affects about 15 percent of the federal workforce.

Office of Management and Budget (OMB) Director and incoming Acting White House Chief of Staff Mick Mulvaney said Dec. 23 that the shutdown could potentially continue into the new year. He said the White House has since reduced the requested $5 billion in border-wall funding and hopes the Democrats can move higher than the $1.3 billion amount they’ve floated previously.

He also said that federal paychecks would go out as scheduled on Dec. 28, and only a future payday, scheduled for Jan. 11, would be affected.

More than 420,000 government employees deemed essential would be working without pay and over 380,000 would be furloughed, according to the projection by Senate Appropriations Committee staff. The essential workers have back pay guaranteed once their agency gets funded. Those furloughed don’t get the back pay automatically, but Congress has usually approved a measure to pay them for the shutdown period.

Trump said he’s heard from federal workers that he should maintain the partial shutdown until the wall funding is approved.

“I think they understand what’s happening,” he said. “They want border security.”

Americans were split sharply along party lines both on the Trump’s performance regarding immigration as well as who’d be to blame for the shutdown—while Democrats mostly laid the blame on Trump, Republicans would generally blame the Democratic lawmakers or “everyone equally,” according to a Dec. 16-18 YouGov poll (pdf). Only 6 percent of Americans blamed Republicans in Congress.