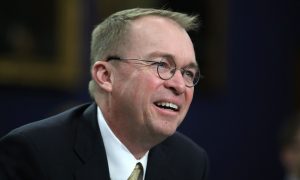 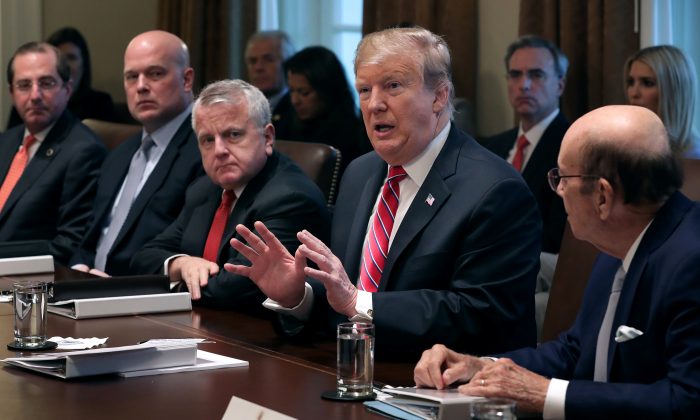 President Donald Trump talks to reporters during a meeting with members of his cabinet in the Cabinet Room at the White House on Feb. 12, 2019. (Chip Somodevilla/Getty Images)
Trump Administration

President Donald Trump is reserving his final decision on whether he’ll sign a bill with $1.4 billion appropriated for the border wall until after he sees what else is in it.

“We want to see what the final piece of legislation looks like,” White House press secretary Sarah Sanders told reporters on Feb. 13. ”It’s hard to say definitively whether or not the president is going to sign it until we know everything that’s in it.”

Key points of the bill were agreed upon by congressional negotiators on Feb. 11, but the language of the bill is still being ironed out by the Senate Appropriations Committee.

The committee staff hopes to have the bill filed by the evening of Feb. 13, said a spokesperson for the committee’s chairman, Sen. Richard Shelby (R-Ala.), in a phone call.

Trump has indicated he may begrudgingly accept the bill, which is far short of his request of $5.7 billion for border wall construction in 2019.

“The president isn’t fully happy, as he said yesterday, with everything that’s in the legislation, but there are some positive pieces of it,” Sanders said.

The bill includes $1.375 billion for constructing 55 miles of new fencing in the Rio Grande Valley, the highest priority for Border Patrol, according to information provided by senior congressional aides.

The new wall can be of any design already deployed by the Border Patrol, which includes a steel slat fence Trump deemed acceptable.

The Border Patrol catches nearly 40 percent of all illegal border crossers in the valley sector—more than 77,000 during the first four months of fiscal 2019, which marks an increase of more than 80 percent compared with the same period the year before.

The congressional negotiators, nine Democrats and eight Republicans from both Senate and the House of Representatives, hit a snag over the weekend due to the Democrats proposing limits on the detention capacity of Immigration and Customs Enforcement (ICE).

The current detention population is about 49,000, which the Democrats want to bring down, and Trump wants to increase.

The negotiators came up with a somewhat Solomonic solution, providing funding for about 45,000 beds, but giving ICE the authority to transfer up to $750 million of other funding toward detention, which would raise the capacity by 13,000.

Trump said he plans to combine the wall money from Congress with other funding transferred from other parts of the budget.

“Was just presented the concept and parameters of the Border Security Deal by hard-working Senator Richard Shelby,” he said in a Feb. 12 tweet. “Looking over all aspects knowing that this will be hooked up with lots of money from other sources.”

Was just presented the concept and parameters of the Border Security Deal by hard working Senator Richard Shelby. Looking over all aspects knowing that this will be hooked up with lots of money from other sources….

The president has multiple legal ways to reprogram funding, though some of them only become available if he declares a national emergency, according to his budget chief and acting chief of staff, Mick Mulvaney. “The whole pot is well north of $5.7 billion,” Mulvaney said on Feb. 10.

“The president’s got a number of options, he’s going to keep all those on the table,” Sanders said. “We’ll make a determination of what is necessary, based on what the final piece of legislation looks like.”

Trump took a firm stance on having a wall for border security in December, warning Congress that he wouldn’t sign a budget bill without funding for it. But leaders of Democrats in Congress wouldn’t give ground, letting a quarter of the federal government run out of money on Dec. 22. Only after a record 35 days of shutdown, and Trump’s extensive arguments on the merits of a barrier, did the Democrats agree to negotiate on the funding and Trump agreed to fund the government until Feb. 15.

Sanders acknowledged the shutdown helped Trump bring border security to the forefront with the public.

“I think that the American people have a better understanding of the true crisis, the national security and humanitarian crisis at the border,” she said.

While unhappy with the result of the negotiations, Trump said he doesn’t want another shutdown.

“I want to thank all Republicans for the work you have done in dealing with the Radical Left on Border Security,” he said in a Feb. 12 tweet. “Not an easy task, but the Wall is being built and will be a great achievement and contributor toward life and safety within our Country!”

I want to thank all Republicans for the work you have done in dealing with the Radical Left on Border Security. Not an easy task, but the Wall is being built and will be a great achievement and contributor toward life and safety within our Country!