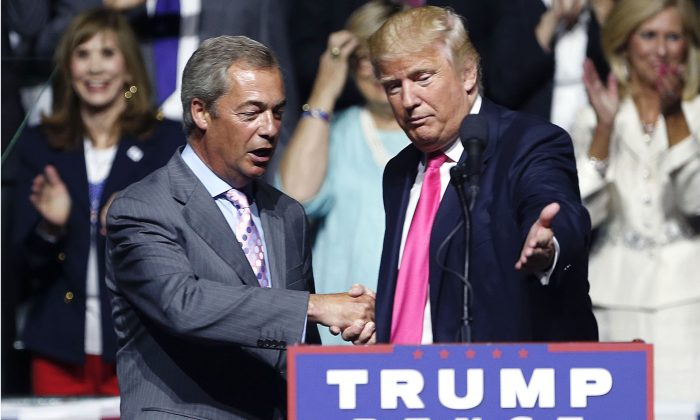 The Associated Press
View profile
Follow
biggersmaller
Print
LONDON—Donald Trump has a plan for making the vaunted relationship between Britain and the U.S. even more special: Make the impish acting leader of the UK Independence Party, Nigel Farage, British ambassador in Washington.

Prime Minister Theresa May has another idea—leave British appointments to the government, thank you very much.

Her representatives Tuesday quickly shot down Trump’s extraordinarily undiplomatic initiative, which was expressed in a tweet the night before by the U.S. president-elect.

“Many people would like to see @Nigel_Farage represent Great Britain as their Ambassador to the United States. He would do a great job!” Trump said.

Many people would like to see @Nigel_Farage represent Great Britain as their Ambassador to the United States. He would do a great job!

But the Farage farrago suggests that Trump and the British prime minister aren’t off to a warm start, and that, in the Trump era, Farage will be a force to be reckoned with.

Trump’s unusual effort to pressure the British government into naming Farage to what is widely viewed as its most prestigious diplomatic post focused new attention on the unorthodox UKIP figure who played a key role in convincing British voters to leave the European Union in the June referendum.

Foreign Minister Boris Johnson and others said there was no way Farage would be chosen—and some in Parliament had a few laughs at the prospect—prompting a wounded Farage to accuse May and her Cabinet of living in the past and slowing down the Brexit process. He said their personal dislike for him was hurting Britain.

“The world has changed and it’s time that Downing Street did too,” Farage said on the pro-Trump Breitbart website.

Farage’s words had a hard edge. He said “a new order” is taking over in Washington, while in Britain the top players remain the same. He complained that politicians who had favored keeping Britain inside the EU bloc—a position favored by May before the referendum—remain in charge of U.K. policies.

Taking an apparent swipe at the tousle-haired Johnson, who in the past called Trump “out of his mind,” Farage said politicians who once denounced Trump “now pretend” to be his friend.

There is little question that Trump sees Farage as a potential friend. Trump endorsed the Brexit movement even as it was opposed by President Barack Obama and other global leaders.

Farage returned the favor by campaigning for Trump in Mississippi, and he became the first foreign politician invited to Trump Tower after Trump’s victory over Hillary Clinton.

The two wealthy men, both with entrepreneurial backgrounds, share an anti-establishment mentality.

By contrast, Trump doesn’t seem anxious to develop a personal relationship with May. She was the tenth foreign leader he spoke to after his victory, and he casually asked her to let him know if she was traveling to the United States — far short of a formal invitation to the White House.

Jacob Parakilas, assistant head of the U.S. and Americas Program at the Chatham House think tank, said Trump’s actions suggests problems ahead in his dealings with May.

“I think this is an indication that the relationship between Trump and Prime Minister May is going to be off to a rocky start,” he said, suggesting that Farage might well work closely with Trump even without British government backing.

“This type of public intervention is really unprecedented in modern American history,” he said.

It wasn’t well received in Parliament.

“Farage as ambassador is a frankly stupid idea,” he said. “I have more diplomacy in my little finger.”

The high status posting traditionally goes to one of Britain’s most experienced diplomats and carries substantial social clout.

No one from UKIP has ever held an ambassadorial post in Britain. The often fractious party has but one member in Parliament, and Farage’s own bid for a seat fell short last year when voters rejected him.

He is a member of the European Parliament — despite his constant criticism of the institution.

Farage stepped down as party leader after the Brexit victory, saying he wanted his life back, but he returned to the fold when his disillusioned successor, Diane James, resigned after just 18 days. She has since left the party.

Farage has said he will not be competing for the party leadership and is only serving in an interim capacity, but some observers expect him to remain in the top job.