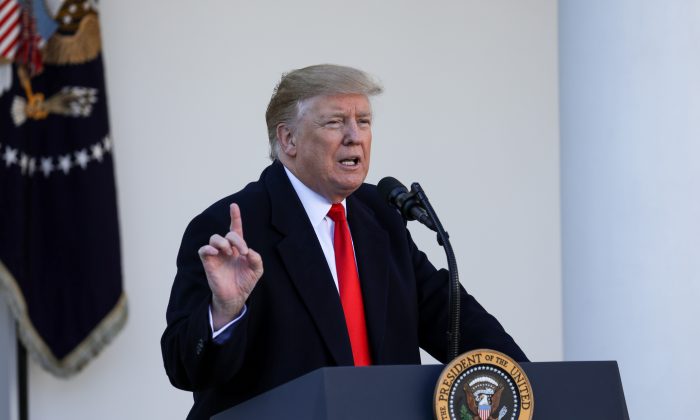 Trump Vows to Veto Any Attempt to Block His Emergency Declaration

WASHINGTON—President Donald Trump said on Feb. 22 that he would “100 percent” veto a resolution terminating the national emergency declaration he signed a week ago. It’s unlikely the resolution would make it past the Senate, and if it did, it’s even less likely both houses would have a two-thirds majority to override a veto.

“We have too many smart people that want border security, so I can’t imagine if it survives a veto, but I will veto it,” Trump said. “Everybody knows we need border security. We need a wall. I think it’s a very bad subject for the Democrats. We need a wall. We’ve apprehended more people than we have in many, many years … With a wall, we wouldn’t even have to apprehend them.”

Earlier on Feb. 22, House Democrats filed a privileged resolution to terminate the national emergency under the premise there is no emergency and the president is overreaching.

Introduced by Rep. Joaquin Castro (D-Texas) and with the backing of Speaker Nancy Pelosi (D-Calif.), the resolution would block $6.1 billion that Trump has earmarked from the defense budget for border fencing.

Pelosi said a floor vote is expected on Tuesday, Feb. 26.

She denounced the national emergency as an act of “violence to our Constitution.” She said Trump’s action declaration is “lawless,” and there is no crisis or emergency at the border.

Castro said the resolution currently has around 226 cosponsors, including one Republican, Rep. Justin Amash (R-Mich.).

“It should also be said there is no emergency at the border,” Castro said on a call with reporters.

“Declaring a national emergency is a sobering act, which is why Congress enacted a statute governing when and how the president can take this action,” Collins said in a statement Feb. 22. “House Democrats’ angst over Congress’ power of the purse is unwarranted, especially since the commander in chief’s authority to redirect military funds for a national emergency is affirmed in a law passed by their own branch.”

Trump said the amount of drugs, gangs, and illegal aliens that are pouring into the country warrant a national emergency.

“We’re going to confront the national security crisis on our southern border and we’re going to do it one way or the other. We have to do it,” Trump said on Feb. 15. “We have tremendous amounts of drugs flowing into our country, much of it coming from the southern border.”

The states argued that “the federal government’s own data prove there is no national emergency at the southern border that warrants construction of a wall.”

However, Department of Homeland Security data shows that tens of thousands of illegal immigrants are flooding across the border each month, posing a threat to national security.