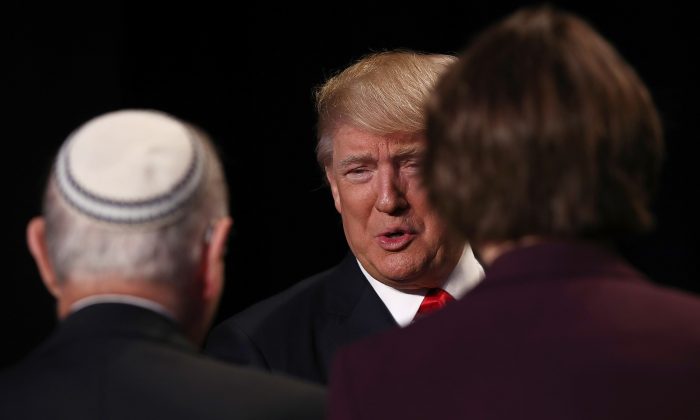 U.S. President Donald Trump greets members of the head table while arriving at the National Prayer Breakfast in Washington on Feb. 2, 2017. Every U.S. president since Dwight Eisenhower has addressed the annual event. (Win McNamee/Getty Images)
US

Warning that religious freedom is “under threat,” President Donald Trump vowed Thursday to repeal the Johnson Amendment, an IRS rule barring pastors from endorsing candidates from the pulpit.”

“I will get rid of and totally destroy the Johnson Amendment and allow our representatives of faith to speak freely and without fear of retribution,” Trump said during remarks at the National Prayer Breakfast, a high-profile event bringing together faith leaders, politicians and dignitaries.

Trump also defended his recent executive order on immigration, decrying “generous” immigration policies and arguing that there were people who sought to enter the country “for the purpose of spreading violence or oppressing other people based upon their faith.” He also pledged to take more immigration action in the name of religious liberty.

Advocating a ‘Coup’ Against Trump Is Against the Law

“In the coming days we will develop a system to help ensure that those admitted into our country fully embrace our values of religious and personal liberty and that they reject any form of oppression and discrimination,” Trump said.

Trump did not detail how he will scrap the IRS rule, which he has previously pledged to do away with. The rule has been in place since 1954, but it is very rare for a church to actually be penalized.

During a Monday news briefing, White House spokesman Sean Spicer offered no details on whether Trump could still issue an executive order. “There is a lot of executive orders, a lot of things that the president has talked about and will continue to fulfill, but we have nothing on that front now,” Spicer said.