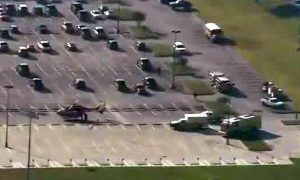 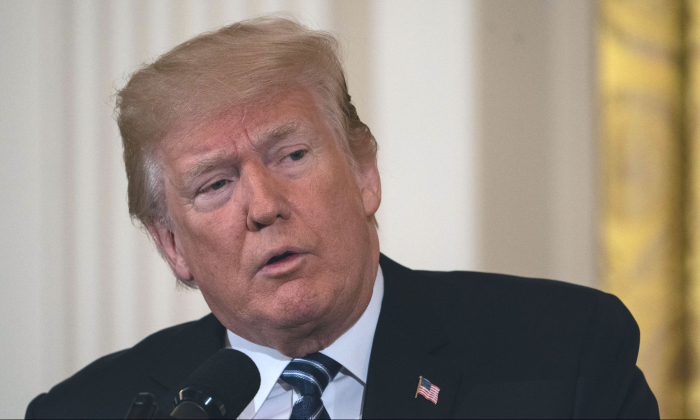 President Donald Trump addresses a meeting on prison reform at the White House in Washington, DC, on May 18, 2018. (NICHOLAS KAMM/AFP/Getty Images)
Trump Administration

President Donald Trump sent a message of love and support to the people affected by the school shooting in Texas on Friday and vowed to do everything within his power to protect students.

“We grieve for the terrible loss of life, and send our support and love to everyone affected by this absolutely horrific attack,” Trump said at the White House on Friday. “To the students, families, teachers, and personnel at Santa Fe High School—we are with you in this tragic hour, and we will be with you forever.”

“This has been going on too long in our country, too many years, too many decades now,” Trump continued. “My administration is determined to do everything in our power to protect our students, secure our schools and to keep weapons out of the hands of those who pose a threat to themselves and to others.”

At least eight people died in the shooting at a Santa Fe, Texas, high school. Police searching the building said they had taken into custody a student suspected of the attack and found explosives in the school building.

Harris County Sheriff Ed Gonzalez said that eight to 10 students and adults died in the incident at the school about 30 miles southeast of Houston.

“There is one person, a suspect, in custody and a second possible person of interest that is detained and being questioned,” Gonzalez said at a news conference.

Explosive devices had also been found at the school and off campus, Gonzalez tweeted. “Law enforcement is in the process of rendering them safe. School has been evacuated.”

The suspect is a 17-year-old male, a law enforcement source who spoke on condition of anonymity because he was not authorized to publicly discuss the investigation, told Reuters.

At least nine people were taken to area hospitals for treatment, hospital officials said. The conditions of those people were not immediately clear. Gonzalez said a police officer was also being treated for injuries.

Trump has already taken several steps to protect schools and students in the wake of a shooting at a Parkland, Florida, high school in February. The White House proposed legislation to strengthen background checks and arm properly trained school personnel.