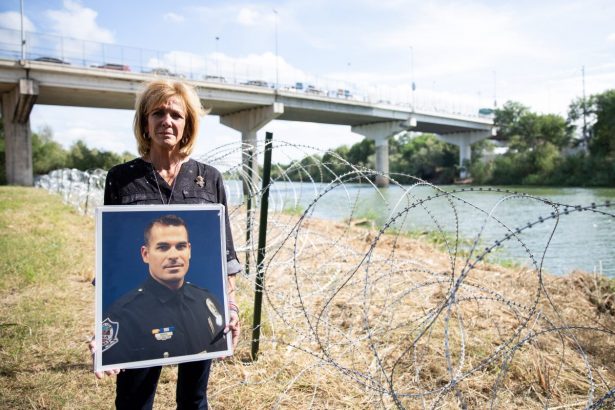 Mary Ann Mendoza, whose son Sgt. Brandon Mendoza was killed by an illegal alien, is next to the Rio Grande, which is the border between the United States and Mexico, in Hidalgo, Texas, on Nov. 5, 2018. (Samira Bouaou/The Epoch Times)
Trump Administration

WASHINGTON—Ever since her son was killed by an illegal alien, Mary Ann Mendoza has been outspoken about the issue of illegal alien crime in the United States.

Her son, Sgt. Brandon Mendoza, was killed in 2014 in a car crash caused by a drunk illegal alien who was speeding along the highway in the wrong direction.

Mendoza has built up large followings on Twitter and Facebook to get her message out about securing the border. She often uses the platforms to confronts politicians about it.

Mendoza appealed twice, but Twitter said her account will only be reinstated if she removes six tweets they deem offensive.

One tweet reads: “@SpeakerPelosi Americans are torn apart every hour by ILLEGAL ALIEN CRIMINALS. EVERY HOUR.”

Another reads: “Meanwhile, 4,300+ Americans are KILLED EVERY YEAR by ILLEGAL ALIENS in the US. What do you have to say about that NEVER AGAIN?”

Another reads: “@RepJoeKennedy Heaven forbid one of those unvetted fighting aged men gets released and harms or kills someone you love … I know firsthand what ONE ILLEGAL ALIEN CRIMINAL can do to devastate a family. Look my son in the eye and tell him YOU’RE SORRY for contributing to his death.”

To rub salt into the wound, Facebook followed suit after Mendoza posted screenshots of her Twitter ban on the platform. Facebook gave her a 3-day suspension, delayed by 24 hours, and she will be back on the platform early July 22. She said the first thing she intends to post is the legal definition of “illegal alien.”

Mendoza said she finds the sudden suspensions odd, “because this is the way I’ve been talking ever since I joined Twitter” in October 2015.

“It’s disgusting,” Mendoza said, adding that she sees a double-standard on what’s allowed and what’s deemed inappropriate when talking about illegal aliens and the border crisis.

“Anybody can say anything they want about how terrible our president is, and how there’s concentration camps, and how racist people are who are against illegal immigration,” she said. “But when you bring up an innocent American’s life and you fight to bring awareness to what’s happening, only to be shut down and basically slapped across the face—what’s right about that? There’s nothing right about that.”

She said plenty of hateful messages have been directed at her over the years.

“I’ve had people tweet to me, ‘Your son deserved to die,’ ‘I hope you die at the hands of a drunk illegal alien, just like your son did, you deserve that,’ ‘Your son’s a pig and so are you,’” she said. “Most of them I just block the people and go on with my life. But some of the more heinous ones, I’ve reported.”

She said when she reports them, both Twitter and Facebook tell her to just block the user.

Mendoza started a group called Angel Families to amplify the voices of those who have been affected by illegal alien crime. She is also part of the board of directors for the We Build the Wall foundation, which recently built half a mile of border fence near El Paso with money raised through crowdfunding. She also joined the advisory board for Women for Trump last week.

But Mendoza has some powerful friends. President Donald Trump lent his voice to the issue on July 21 with a tweet supporting Mendoza.

Mendoza said she was shocked to see his tweet, wondering if it was real. She said she’s not sure how much impact he can have, “because he’s the biggest conservative they try and block.”

Mendoza is adamant that she won’t delete her tweets.

She said she will speak to lawyers in Washington this week about suing Twitter and bringing in other banned people such as Sheriff David Clarke.

“We’ve got to stand up for ourselves. We cannot continue to allow our voices to be silenced,” she said. “I am going to fight to have my place on Twitter like everybody else does. I’ve worked too hard for the followers I have and the platform that I’ve built up—not only with myself but with angel families. No, you’re not silencing me.”