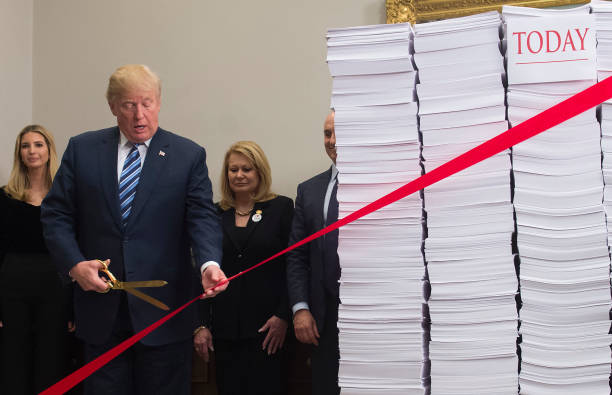 U.S. President Donald Trump holds gold scissors as he cuts a red tape tied between two stacks of papers representing the government regulations of the 1960s and the regulations of today (R) after he spoke about his administration's efforts in deregulation in the Roosevelt Room of the White House in Washington, DC, Dec. 14, 2017. (SAUL LOEB/AFP/Getty Images)
Trump Administration

WASHINGTON—Economists are divided over the impact of regulations on economic growth. The Trump administration, however, sees strong evidence that regulatory rollback is boosting jobs and economic growth.

Since taking office, President Donald Trump frequently has said that over-regulation is a costly burden to American workers and businesses and pledged to rollback “unnecessary and ineffective” regulations.

“We have set a record on killing regulations. No administration has knocked out as many as us, and we have a long way to go,” Trump said Oct. 17 during his meeting with business leaders on “cutting the red tape, unleashing economic freedom” at the White House.

“And one of the reasons the economy is so strong is that we’re not hampered by the ridiculous regulations that we were getting rid of,” he said.

The U.S. economy grew by 4.2 percent in the second quarter, the fastest pace since the third quarter of 2014. And the unemployment rate dropped to 3.7 percent, its lowest level in nearly 50 years.

By cutting regulations, the federal agencies have achieved a net cost savings of $23 billion this year, according to the White House. And since Trump took office, regulatory reform efforts have saved $33 billion.

In stark contrast, President Barack Obama, in the first 21 months of his presidency, added $245 billion in regulatory costs.

Soon after his inauguration, Trump ordered his team to slash regulatory hurdles. He signed last year an executive order that required two rules to be removed for every new regulation imposed.

The government agencies eliminated 176 regulatory actions and imposed only 14 new important regulations, so far. Thus they have exceeded Trump’s requirement, cutting 12 old rules for every new one.

According to the White House, the administration focuses on commonsense regulatory reform, eliminating regulations that are no longer beneficial for the American people. But at the same time, they make sure they are not neglecting legal responsibilities to protect health, safety, and the environment, they claim.

The deregulatory efforts are in line with the principles of individual liberty and limited government, Neomi Rao, administrator of the Office of Information and Regulatory Affairs said during the meeting.

“Regulatory reform is in part about furthering individual liberty and the rule of law,” she said.

“Americans are hardworking and productive, and when government gets out of the way, we can see that jobs are created, businesses grow, and innovation flourishes.”

Studies show that over-regulation poses significant problems for existing small businesses and potential entrepreneurs in the United States. The complexity of the regulations, the difficulty of interpreting them, and costs of compliance hinder entrepreneurship and innovation.

A 10-percent rise in federal regulations leads to a 0.5 percent decline in the number of small firms, while the impact on large firms is statistically immaterial, according to a study by the Mercatus Center at George Mason University.

“We have new heads of many regulatory agencies in place now, and they have been boots on the ground trying to listen to concerns from community bankers and address those concerns.  So it’s going well,” Cundiff told Trump during the meeting.

“We have so much more to do,” she added.

During the event, Trump also talked about the recent initiative dealing with workforce development.

“A lot of people are being trained and we’re training a lot of people.  And companies are coming into our country now at a record clip, and they’re all coming in and training large amounts of people,” he said.

Chris Chinn, director of the Missouri Department of Agriculture, who attended the meeting praised the administration’s efforts to improve high-speed internet access in rural America.

“The agriculture industry is very appreciative of everything that you’ve done.  You’ve brought attention back to rural America, and we appreciate it,” he said.

Adam Red, a councilman for the Southern Ute Indian Tribe of Ignacio, said the deregulation efforts helped his tribe.

“Our tribe has faced hurdles for years, and now we’re starting to see some of the light come through with the work,” he said.

“I think within a period of about another year, we will have just about everything that we’ve wanted,” he said.

The administration will soon release 2018 regulatory reform report and the fall unified agenda, which is the regulatory action that agencies project for the coming year.

During the meeting, Trump also said he would ask his Cabinet members to tighten belts.

“We’re going to ask every Secretary to cut 5 percent for next year,” he said.