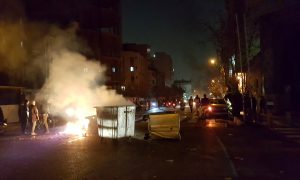 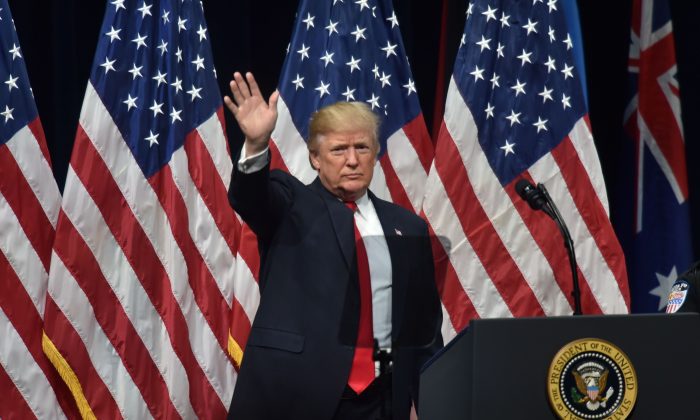 President Donald Trump and his administration voiced support on Friday for protests in Iran and condemned the arrest of peaceful protesters.

“Many reports of peaceful protests by Iranian citizens fed up with regime’s corruption and its squandering of the nation’s wealth to fund terrorism abroad,” Trump wrote on Twitter on Friday evening, Dec. 29. “Iranian govt should respect their people’s rights, including right to express themselves. The world is watching! ”

Tensions continue to rise in Iran since protests against the ruling regime broke out in several cities. Police used a water cannon and tear gas on Friday to disperse around 300 protesters in Kermanshah, a city in western Iran, Al Jazeera reported, citing the semi-state news agency Fars. The protests spread to the capital city Tehran, according to social media posts.

The U.S. Department of State issued a strongly worded critique of the Iranian regime in a statement on Friday, saying that the country’s leaders “have turned a wealthy country with a rich history and culture into an economically depleted rogue state whose chief exports are violence, bloodshed, and chaos.”

In the same statement, the State Department echoed prior comments from Trump and Secretary of State Rex Tillerson, asserting that the biggest victims of the Iranian regime are its own people and that the United States supports a peaceful transition of government.

Trump singled out Iran as the single biggest enemy to peace and prosperity in the Middle East in a speech during his state visit to Saudi Arabia in May this year.

“From Lebanon to Iraq to Yemen, Iran funds, arms, and trains terrorists, militias, and other extremist groups that spread destruction and chaos across the region. For decades, Iran has fueled the fires of sectarian conflict and terror,” Trump said. “It is a government that speaks openly of mass murder, vowing the destruction of Israel, death to America, and ruin for many leaders and nations in this room.”

Trump followed by urging “all nations of conscience” to isolate Iran, deny its funding of terrorism,  “and pray for the day when the Iranian people have the just and righteous government they deserve.”

For years, Trump has been critical of the nuclear deal that the Obama administration secured with Iran, saying that it can lead to nuclear war in the Middle East. Trump will have an opportunity to nix the deal and its related sanctions in January, as the deadline for recertification approaches, Newsweek reported.

A scathing in-depth feature by POLITICO published earlier this month showed that the Obama administration stalled and blocked an investigation into a billion-dollar criminal enterprise run by the Hezbollah terrorist group in order to appease Iran before the nuclear deal. According to the report, Hezbollah trafficked drugs into the United States to fund its terrorist activities. The United States had a chance to squash the criminal enterprise, but the effort was reportedly stalled by the Obama administration and was eventually shut down.

Anti-government protests broke out in Iran for the third day running on Saturday as separate state-sponsored rallies were staged to mark the end of unrest that shook the country in 2009, according to Iranian news agencies and state media.

Day 3. Hundreds of people have gathered in #Urmia (West Azarbaijan
Province) and chant: "Death to the Dictator (Ayatollah Khamenei) pic.twitter.com/AuYBXj8gto

At the same time, social media postings said protests broke out for the third straight day in cities including Tehran and Kermanshah. One video showed dozens of protesters booing after police announced over a loudspeaker that any gathering would be illegal. The footage could not be authenticated.

The semiofficial news agency Fars said up to 70 students gathered in front of Tehran University and hurled rocks at police. A social media video showed them chanting “Death to the dictator,” an apparent reference to Khamenei.

Another video appeared to show security forces arresting demonstrators in another part of Tehran, with protesters shouting, “Let him go! Let him go!”

In a further video, which could not be verified, marchers in the western town of Dorud chanted, “Death to the dictator.”

Dozens of protesters gathered in the western city of Shahr-e Kord, ISNA said. Social media footage appeared to show a protester being helped by his compatriots after being teargassed.

Meanwhile, state television showed a rally in the capital of Tehran as well as marchers carrying banners in support of Supreme Leader Ayatollah Ali Khamenei in Mashhad, Iran’s second largest city where protests over prices turned political on Thursday.

State-sponsored mass rallies were scheduled in more than 1,200 cities and towns, state TV said—events held annually to commemorate the end of months of street protests that followed Mahmoud Ahmadinejad’s disputed re-election as president.

Openly political protests are rare in the Islamic Republic, where security services are omnipresent.

But there is considerable discontent over high unemployment, inflation, and alleged graft. Some of the new protests have turned political over issues including Iran’s costly involvement in regional conflicts such as those in Syria and Iraq.

Joblessness has risen and annual inflation is running at about 8 percent, with shortages of some foods contributing to higher prices and hardship for many families.

“We ask people not to take part in unlawful gatherings. If they plan a gathering they should apply (for a permit),” he told the Young Journalists Club news website.

On Thursday, hundreds of people took to the streets in Mashhad, one of the holiest places in Shiite Islam, to protest against high prices and shouted anti-government slogans. Police arrested 52 people, according to a judicial official.

Friday witnessed the largest wave of demonstrations since 2009 as protests spread to Tehran and other cities.

State broadcaster IRIB had not covered the protests “after being asked by relevant bodies that the issue should not be reflected on state radio and television,” its website quoted an unnamed official as saying.

Most of those arrested in the last two days had been released, state TV said, without giving details.

“Enemy websites and foreign media continue to try to exploit economic hardships and the legitimate demands of the people in this respect to launch illegal gatherings and possible unrest,” it said.

The elite Revolutionary Guard and its Basij militia, which spearheaded the security crackdown that crushed the protests of 2009, said in a statement carried by state media, “The Iranian nation … will not allow the country to be hurt.”

Though purely political protests are seldom seen in Iran, demonstrations are often held by workers over layoffs or nonpayment of salaries and by people who hold deposits in nonregulated, bankrupt financial institutions.

President Hassan Rouhani’s leading achievement—a 2015 deal with world powers that curbed Iran’s nuclear program in return for a lifting of most international sanctions—has yet to bring the broad economic benefits the government said are coming.

Unemployment has risen to 12.4 percent this fiscal year, according to the Statistical Centre of Iran, up 1.4 percentage points and leaving about 3.2 million Iranians jobless.