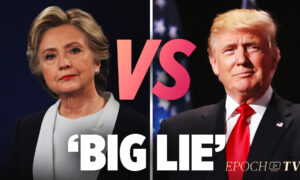 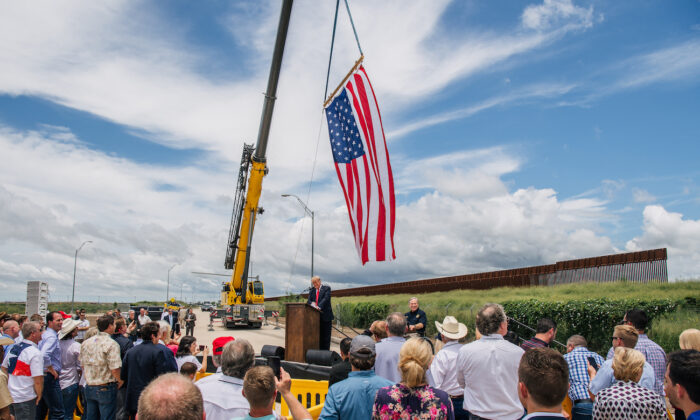 People listen to former President Donald Trump's address during a tour to an unfinished section of the border wall in Pharr, Texas, on June 30, 2021. (Brandon Bell/Getty Images)
Donald Trump

Former President Donald Trump on June 30 visited the U.S.–Mexico border for the first time since leaving office and accused Democrats of running a “disinformation campaign” around their border policies.

Since leaving office in January, Trump has repeatedly criticized the Biden administration’s policies and messaging, saying they have led to a surge in illegal crossings. But while visiting with Texas Gov. Greg Abbott, the former commander-in-chief appeared to deploy a new narrative.

“They’re getting killed by the border, so now they’re saying, ‘Oh, we’ve got a problem, so let’s blame the sheriffs, let’s blame the governors, let’s blame everybody else but them,” Trump said, describing Democrats’ messaging of late as a “disinformation campaign.”

The former president’s visit to the Texas side of the border comes as Republicans continue to criticize Democrats and President Joe Biden’s administration on border security and the increase in Border Patrol apprehensions in recent months. According to the most recent data provided by Customs and Border Protection, more than 180,000 people were arrested after illegally crossing the border in May 2020.

Since January, Biden has issued dozens of executive orders and memos that rescinded a number of Trump-era policies, while describing them as wasteful, ineffective, and unhumanitarian. The president also sent back billions of dollars that were authorized for border wall construction to the Department of Defense.

“The real question is, do [Democratic officals] really want open borders, or are they incompetent?” Trump said during the event. Trump had made the construction of a border wall a key campaign promise in 2016. “There’s only two things: you’re either incompetent or for some reason you have a screw loose and you want to have open borders.”

Several Democrat lawmakers who represent areas along the border panned Trump’s visit on June 30 and took the opportunity to chide Abbott.

“Instead of prioritizing Texans and making sure we grow our economy and get people back to work, Governor Abbott is creating a distracting media circus with a failed former president,” Rep. Filemon Vela (D-Texas) said in a statement.

“The narrative of a violent and insecure border region is blatantly false. The border is not a war zone, and the wall Abbott and Trump are trying to get Texans to pay for is not only a waste of their hard-earned money but also an un-American symbol of hatred.”

Last week, Vice President Kamala Harris visited the area for the first time to see a processing center in El Paso, Texas, following weeks of criticism that she hadn’t yet visited the border amid surging numbers of border-crossers.

“They are without their parents. They are also full of hope. They were asking me questions. ‘How do you become the first woman vice president?'” Harris said of children at one processing center. “But it also reminds me of the fact that this issue cannot be reduced to a political issue. We’re talking about children. We’re talking about families. We’re talking about suffering. And our approach has to be thoughtful and effective.”

Abbott and Arizona Gov. Doug Ducey, both Republicans, recently asked 48 other states to send additional law enforcement to deal with the surge along the border. So far, a handful of GOP-led states have responded to their request, with South Dakota being the most recent state to do so.

In one of Trump’s final trips as president in January, he visited the wall near the Mexican–Texas border, urging for the completion of the project. More than 450 miles of the wall were constructed during his administration, according to data released earlier this year by Customs and Border Protection.

The Epoch Times has contacted the Department of Homeland Security, which oversees Border Patrol, for comment.