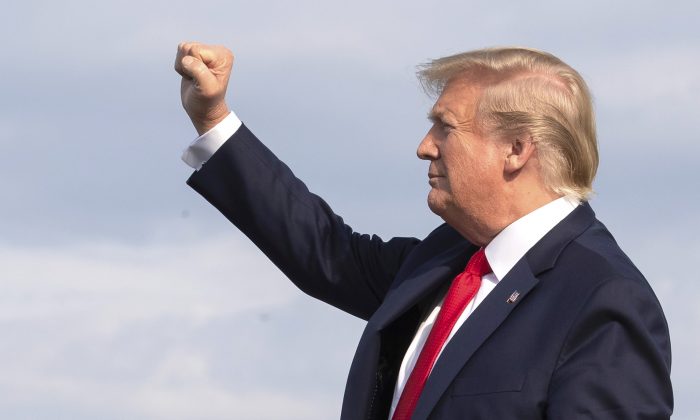 President Donald Trump on Wednesday, July 24, vetoed a trio of congressional resolutions aimed at blocking the sale of weapons to Saudi Arabia due to the kingdom’s involvement in the conflict in Yemen.

Trump announced in messages to the Senate that he was returning the bills that would have blocked licensing for certain arms sales in Saudi Arabia, the United Arab Emirates, the UK, France, Spain, and Italy.

“Apart from negatively affecting our bilateral relationships with Saudi Arabia, the United Kingdom, Spain, and Italy, the joint resolution would hamper the ability of the United States to sustain and shape critical security cooperation activities,” Trump said in one of the messages.

He called each resolution “ill-conceived” and said it failed to address the root causes of conflict in Yemen.

“The United States is very concerned about the conflict’s toll on innocent civilians and is working to bring the conflict in Yemen to an end. But we cannot end it through ill-conceived and time-consuming resolutions that fail to address its root causes,” Trump said.

“Rather than expend time and resources on such resolutions, I encourage Congress to direct its efforts toward supporting our work to achieve peace through a negotiated settlement to the conflict in Yemen.”

The White House had earlier said that stopping the sales “would send a message that the United States is abandoning its partners and allies at the very moment when threats to them are increasing.”

The State Department had announced on May 24 of the plan to sell $8.1 billion worth of arms to Middle East allies to counter aggression by Iran, a mutual adversary of the United States and Saudi Arabia, after Secretary of State Mike Pompeo had cited threats from Iran to declare an emergency and secure the approval of the sale.

Iran-backed Houthi rebels in Yemen have recently executed several attacks on Saudis, including the launch of a ballistic missile that struck a civilian airport in Saudi Arabia.

The arms package included thousands of precision-guided munitions, other bombs and ammunition, and aircraft maintenance support.

Majority Leader Mitch McConnell said Wednesday that the Senate is set to vote within days on whether to override Trump’s vetoes. He said the Senate would hold the vote before Aug. 2, when lawmakers leave Washington for a five-week-long recess.

A two-thirds majority in the 100-member Senate would be needed to override the vetoes.

Rep. Eliot Engel, a Democrat from New York who chairs of the House Committee on Foreign Affairs, issued a statement in opposition to Trump’s vetoes on Wednesday afternoon.

“The President’s veto sends a grim message that America’s foreign policy is no longer rooted in our core values—namely a respect for human rights—and that he views Congress not as a coequal branch of government, but an irritant to be avoided or ignored,” Engel said in a news release. “Worse still, this veto is going to cost innocent lives. These weapons are going to continue fueling a reckless and brutal campaign of violence and exacerbating the world’s worst humanitarian catastrophe.”

The view of some congressmen regarding the alliance between the United States and Saudi Arabia soured last year after the murder of U.S.-based columnist Jamal Khashoggi by agents of Saudi Arabia. Khashoggi was an advocate of the Muslim Brotherhood, which is considered a terrorist group by Saudi Arabia, Canada, and Russia.

The Trump administration ultimately sanctioned the individual perpetrators of the murder. He has maintained the United States’ alliance with Saudi Arabia. Pompeo has called the kingdom a “powerful force for stability in an otherwise fraught Middle East.”

On June 20, the United States military confirmed that Iran had shot a U.S. high-altitude drone.

Trump had said at the time, “Iran made a very big mistake,” but created space for Iran to apologize by suggesting that the downing of the drone may have been accidental. Congressional leaders received a closed-door briefing on the situation at the Capitol.

“To reject these sales at this time and under these circumstances is to reward recent Iranian aggression and to encourage further Iranian escalation,” Senate Foreign Relations Committee Chairman Jim Risch (R-Idaho) had said in June, The Associated Press reported.

Blocking the sale would also “encourage miscalculation on the part of Iranians, which will be disastrous,” Risch added.