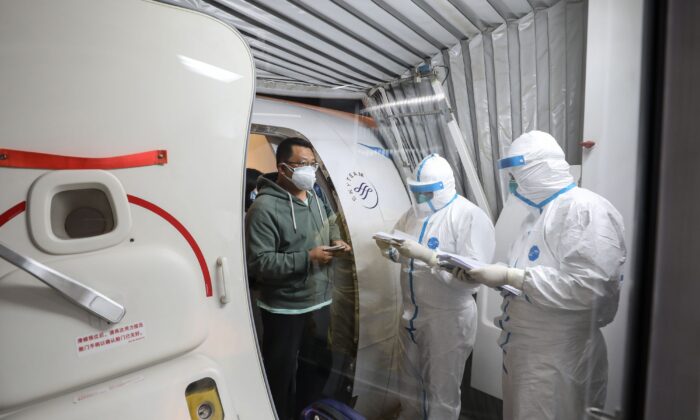 A man (L) disembarking from a Xiamen Airlines plane at the Tianhe airport in Wuhan City, Hubei province, China, on January 31, 2020. (STR/AFP via Getty Images)
AMERICA

Trump: US Will Screen Travelers From High-Risk Countries Upon Arrival

President Donald Trump on Sunday wrote that passengers traveling from certain high-risk countries will be screened before boarding as well as when they arrive in the United States.

The administration on Saturday expanded travel restrictions on Iran, where dozens of deaths have been reported in recent days, and raised an advisory that Americans should refrain from going to parts of Italy and South Korea, where the COVID-19 coronavirus has triggered quarantines.

Northern Italy has been particularly hard-hit by the outbreak, prompting quarantines in Lombardy and around Veneto, while the southern South Korean city of Daegu has also implemented quarantines of its own. Early on in the outbreak last month, the U.S. implemented travel restrictions on people who had been to China within the previous 14 days, and officials, including Trump, last week indicated that the restrictions on China would stay in place for the foreseeable future.

“In addition to screening travelers ‘prior to boarding’ from certain designated high-risk countries, or areas within those countries, they will also be screened when they arrive in America,” Trump wrote on Twitter on Sunday.

Coronavirus: In addition to screening travelers “prior to boarding” from certain designated high risk countries, or areas within those countries, they will also be screened when they arrive in America. Thank you! @VP @SecAzar @CDCgov @CDCDirector

It comes as the United States reported its first COVID-19 fatality on Saturday. Trump and Centers for Disease Control and Prevention (CDC) officials confirmed that a man with an underlying health problem died in a Seattle-area hospital.

“Our hearts go out to the family of the patient who died as well as the families of the people who are caught up in this outbreak,” said top CDC official Dr. Nancy Messonnier in a statement to media outlets. “The health of the residents, staff and community of this skilled nursing facility are a top priority. We will work with Public Health—Seattle and King County to support the care of the patients, the safety of the health care workers, and the well-being of the people in the surrounding community.”

Earlier, the CDC misidentified the person as a female but later issued a correction. Washington state, in the meantime, declared a state of emergency and is investigating a long-term health care facility in King County.

A health care worker in her 50s who worked at the LifeCare Center in Kirkland, Washington state, also tested positive for the mysterious new virus, which has its origins in mainland China. About 50 patients associated with LifeCare are being tested for COVID-19, officials said on Saturday.