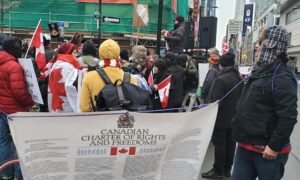 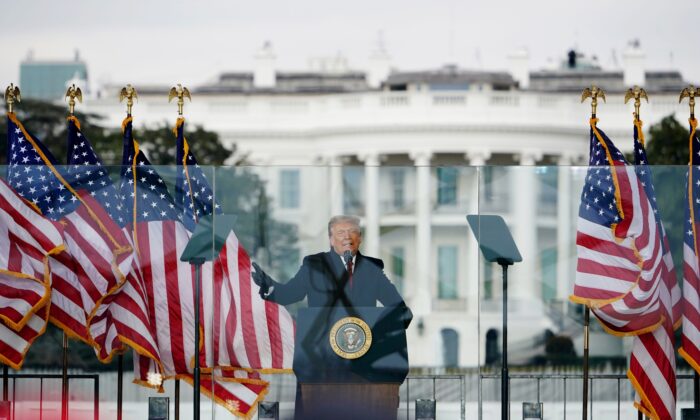 President Donald Trump speaks to supporters from The Ellipse near the White House in Washington on Jan. 6, 2021. (Mandel Ngan/AFP via Getty Images)
US News

President Donald Trump has urged supporters to “stay peaceful” after Congress was forced to go into lockdown amid clashes between protesters and police at the Capitol Building.

“I am asking for everyone at the U.S. Capitol to remain peaceful. No violence! Remember, WE are the Party of Law & Order – respect the Law and our great men and women in Blue. Thank you!” Trump wrote in a tweet on Wednesday.

I am asking for everyone at the U.S. Capitol to remain peaceful. No violence! Remember, WE are the Party of Law & Order – respect the Law and our great men and women in Blue. Thank you!

In an earlier Tweet, he said: “Please support our Capitol Police and Law Enforcement. They are truly on the side of our Country. Stay peaceful!”

Protesters from a pro-Trump rally breached the Capitol Building and clashed with police, prompting the police to put the building under lockdown. Both chambers, whose lawmakers had been debating the certification of Electoral College votes for the presidential election, were put into recess.

“Violence and anarchy are unacceptable. We are a nation of laws,” he wrote in a tweet. “This needs to end now.”

“To all those patriots challenging the fraudulent election, POTUS wants you to EXPRESS YOUR OPINION PEACEFULLY,” Guiliani said on Twitter. “We are the law and order party, You are on the right side of the law and history. Act with respect for all.”

Ronna McDaniel, chairwoman of the Republican Party, also took to Twitter to denounce the violence: “There is no place for violence in our politics, regardless of which side you are on.”

Police fired tear gas and ordered several office buildings to be evacuated as protesters breached the Capitol and were seen marching through the halls of Congress.

Reports of shots fired on Capitol Hill. Police on their way. pic.twitter.com/ixHbQBQxth

Police escorted out House of Representatives members from the chamber where they had been debating, as lawmakers aligned with Trump challenged the election results. The Senate abruptly adjourned and Vice President Mike Pence, who had presided over a joint session of Congress, was escorted from the chamber.

Capitol Police told lawmakers in the House chamber to take gas masks from beneath their seats and prepare to put them on. Officers at the front door of the House chamber had their guns drawn as someone attempted to enter the chamber.

Earlier in the day, thousands of Trump supporters attended a rally near the White House to protest alleged election fraud and call for greater transparency in the election process. Trump addressed the crowd, saying he would “never concede.”

“You don’t concede when there’s theft involved,” Trump said. “We will not take it anymore … we will stop the steal.”

He also asked protesters to “peaceful and patriotically make your voices heard” at the Capitol.