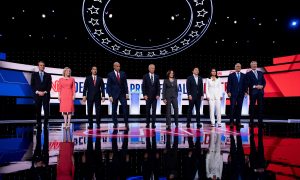 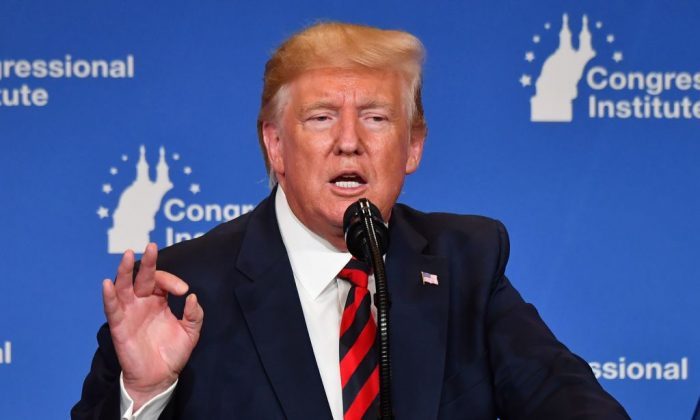 “With the grim specter of socialism descending on the Democrat Party, it is up to all of us ensure the survival of American liberty,” Trump said at the 2019 House Republican Conference member retreat in Baltimore.

“Democrats in Congress have embraced an extreme, destructive, and dangerous agenda, radical socialism, and open borders,” he said, criticizing a wide range of proposals by Democrats such as Medicare for All and the Green New Deal.

Trump said his administration has accomplished “tremendous changes” in the country and promised more changes, including further tax cuts.

“We are working on a tax cut for the middle-income people,” Trump said. “We’ll be announcing it sometime in the next year but it’ll be a very, very substantial tax cut for middle-income folks who work so hard.”

Trump, however, urged Republicans “to prepare for the coming fight because the traditions and beliefs that have made the American dream possible are under attack like never before.”

He said the country “will go to hell if any of these people [Democrats] get in.”

Trump also slammed the media for “colluding” with Democrats.

“We are fighting two battles: Democrats and the media. It is as if they are one. They are working together. They’re colluding and they’re obstructing,” he said.

Trump congratulated North Carolina Republicans Dan Bishop and Greg Murphy, who won the state’s special elections on Sept. 11, saying it made for a “great evening of television.”

“I would not say the fake news was too happy with the outcome,” he added.

“I hit Pocahontas way too early. I thought she was gone. She’s emerged from the ashes and now it looks like she could beat Sleepy Joe. He’s falling asleep. He has no idea what the hell he’s doing or saying.”

Trump addressed his earlier insults against Baltimore, saying that the city has been “destroyed by decades of failed and corrupt rule.”

The retreat was originally scheduled for late January in West Virginia, but was postponed due to the federal government shutdown.

This was Trump’s first visit to Baltimore since calling the city “filthy” two months ago and “a disgusting, rat and rodent-infested mess.” He launched repeated criticisms at Rep. Elijah Cummings (D-Md.) after the lawmaker criticized the conditions at the southern border.

House Minority Leader Kevin McCarthy (R-Calif.) defended Trump’s visit to Baltimore, saying at a news conference during the retreat that the “president made a very good case why many major cities have challenges.”

“I think the president’s coming here symbolizes that, yes, he cares about Baltimore. He cares about the people who live in Baltimore, and he does not accept that you have to stay in poverty,” he said.

Trump’s speech at the retreat lasted more than an hour. He started his remarks at 8 p.m.—the same time the Democratic candidates took the stage in Houston for the third debate of the 2020 primaries.

Read More
Biden Clashes With Warren and Sanders Over Medicare for All: ‘How We Gonna Pay for It?’

“It’s too bad I’m going to miss it,” Trump told reporters before heading to Baltimore. He said that he would have the debate taped.

“It’s going to be very interesting. I look forward to going home. I’m going to have to watch it as a rerun.”