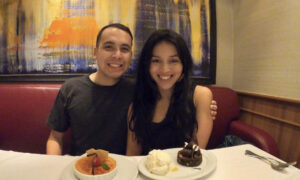 With Over 30 Cruise Ships Stuck at Sea, Passengers Try to Stay Optimistic
0 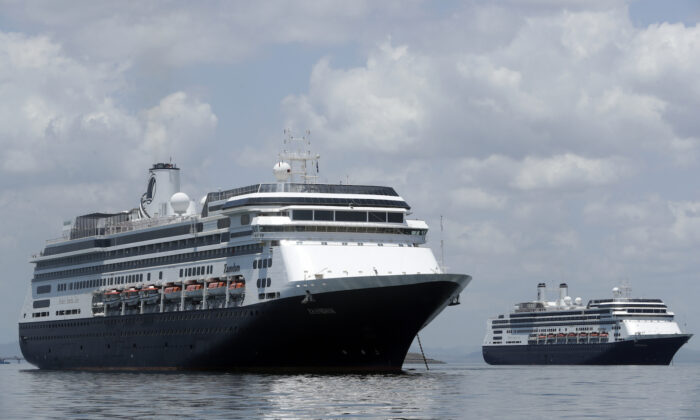 The Zaandam cruise ship (L) carrying some guests with flu-like symptoms, is anchored shortly after it arrives in the bay of Panama City, on March 27, 2020. (Arnulfo Franco/AP)
AMERICA

President Donald Trump said he would ask Florida Gov. Ron DeSantis to allow the docking of a cruise ship with passengers who have had contact with patients suffering from COVID-19.

As of Tuesday evening, four people on Holland America’s Zaandam cruise ship had died, according to a statement by company officials, with eight people testing positive for the CCP virus.

“They’re dying on the ship,” Trump said at a briefing Tuesday, addressing DeSantis’s opposition to letting the Zaandam dock.

“I’m going to do what’s right, not only for us but for humanity,” the president added.

After leaving Argentina in early March, the Zaandam has been stuck at sea, with passengers anxious to disembark once they reach Florida. DeSantis said the state’s health care resources are already stretched too thin to absorb the ship’s CCP virus caseload.

“We cannot afford to have people who aren’t even Floridians dumped into South Florida using up those valuable resources,” DeSantis told Fox News.

“We think it’s a mistake to be putting people into southern Florida right now, given what we’re dealing with, so we would like to have medical personnel simply be dispatched to that ship, and the cruise lines can hopefully arrange for that, tend to folks who may need medical attention,” DeSantis said, according to Fox.

A second Holland America ship, the Rotterdam, took on about two-thirds of the Zaandam’s passengers who passed a medical check. It is expected to arrive at Fort Lauderdale by the end of the week.

“We are dealing with a ‘not my problem’ syndrome,” Ashford said in a statement. “The international community, consistently generous and helpful in the face of human suffering, shut itself off to Zaandam.”

“Nations are justifiably focused on the COVID-19 crisis unfolding before them. But they’ve turned their backs on thousands of people left floating at sea. Are these reactions based on facts from experts like the U.S. Centers for Disease Control and Prevention (CDC), or fueled by irrational fear? What happened to compassion and help thy neighbor?” he said in the statement.

“Already four guests have passed away and I fear other lives are at risk. As of March 30, 76 guests and 117 crew on Zaandam have influenza-like illness, including eight people who have tested positive for COVID-19,” he wrote.

“The COVID-19 situation is one of the most urgent tests of our common humanity. To slam the door in the face of these people betrays our deepest human values,” Ashford wrote.

To date, more than 4,000 people have died from the CCP virus in the United States while over 189,633 cases have been confirmed, according to the latest data collated by Johns Hopkins University, which is tracking the global pandemic.

President Donald Trump said at a White House briefing Tuesday that it is “a matter of life and death” for Americans to heed his administration’s guidelines and predicted the country would soon see a “light at the end of the tunnel” in the fight against the pandemic.

“I want every American to be prepared for the hard days that lie ahead,” Trump said.

“This is going to be one of the roughest two or three weeks we’ve ever had in our country,” Trump added. “We’re going to lose thousands of people.”

As of April 1, a reported 4,081 have died from COVID-19, with 1,096 of those deaths occurring in New York City, which has become the epicenter of the outbreak in the United States. To date, 7,136 people in the United States have recovered from the respiratory disease.

For most people, the CCP virus causes mild or moderate symptoms, such as fever and cough that clear up in two to three weeks. For some, especially older adults and people with existing health problems, it can cause more severe illness, including pneumonia, and death.