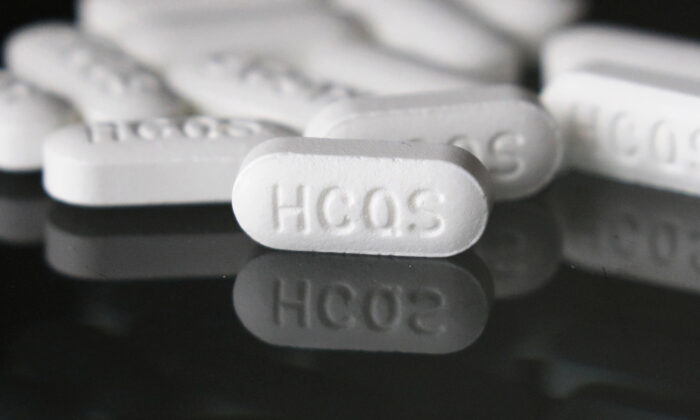 An arrangement of hydroxychloroquine pills is seen in Las Vegas, Nev., on April 6, 2020. (John Locher/AP Photo)
US News

President Donald Trump called on the Food and Drug Administration (FDA) to act immediately on hydroxychloroquine after a new study showed the drug led to a lower mortality rate in COVID-19 patients.

Researchers at the Henry Ford Health System in Michigan analyzed records of over 2,500 patients and concluded 13 percent of those who received hydroxychloroquine alone died, versus 26.4 percent who received only standard of care.

The vast majority of patients were given the drug within 48 hours of admission.

Trump, a Republican, shared results from the study late Monday, accusing his political opponents of disparaging it because he promoted its use earlier this year.

The FDA issued a warning over hydroxychloroquine (HCQ) in April, citing studies that suggested the drug could cause side effects in some patients. In June, the agency revoked emergency use authorization for the drug and the closely related chloroquine (CQ).

The new findings prompted doctors from Henry Ford to send a request to the FDA, White House advisor Peter Navarro told reporters outside the White House on Tuesday morning.

The doctors want emergency use authorization to use the drug for early treatment of COVID-19 in a hospital setting, to allow doctors to prescribe the drug to patients in an outpatient setting, and as use as a prophylaxis, a method that’s been found effective in India, Navarro said.

An FDA spokeswoman told The Epoch Times that the agency isn’t allowed to comment on pending submissions.

Henry Ford didn’t respond to a request for comment.

Navarro asked reporters to keep an open mind about hydroxychloroquine and accused some media outlets and a selection of people in the medical community of politicizing use of the drug because of Trump’s promotion.

A major study claiming to show the drug led to a higher death rate was retracted last month.

The National Institutes of Health and World Health Organization halted studies this month on hydroxychloroquine, saying the drug shows no benefit against COVID-19.

Navarro said the FDA’s moves on hydroxychloroquine were “based on bad science.” The types of studies the agency relied on were either poorly designed or “doomed to failure” because the drug was given as a late treatment, he said.

The decisions have negatively affected Americans’ ability to use the medicine to prevent infection of the CCP (Chinese Communist Party) virus, which causes COVID-19, the advisor said, and have also made it difficult to recruit patients for randomized, double-blind trials that are crucial for testing the safety and efficacy of the drug, he added.

“If the results of the Detroit study are confirmed in later studies, President Trump was absolutely right that hydroxychloroquine can save lives. And if, in fact, early treatment use can lead to a 50 percent reduction in mortality, that’s tens of thousands of American lives that are at stake,” Navarro said.

“Just understand, you or a loved one, you life could be saved if that study is actually right.”