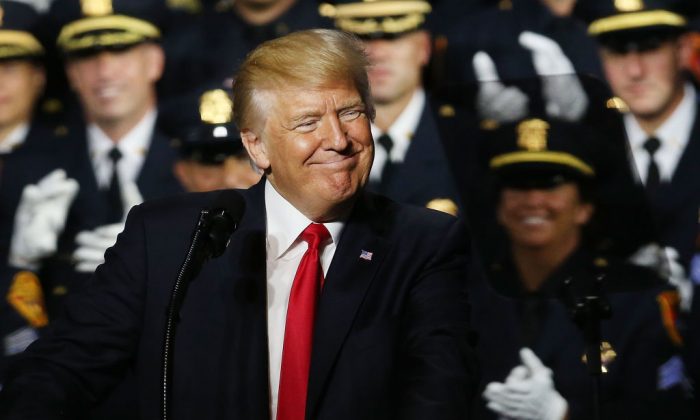 Trump stressed the need for hundreds of additional immigration prosecutors and judges, since current laws require a court proceeding for a deportation to be executed. He also noted that the 6,000 Immigration and Customs Enforcement (ICE) agents working across the country are not enough to handle the gang and illegal immigration threats.

The president’s vivid speech drew frequent applause and loud cheers from the officers gathered to hear him in Brentwood, New York, on Long Island, an area hard hit by violence and murders by the MS-13 gang.

MS-13, a transnational criminal organization, was formed in Los Angeles in the 1980s by Salvadorans fleeing civil war. It has since grown to more than 10,000 members in the United States and has spread throughout El Salvador, Honduras, Guatemala, and Mexico. One of its mottos is “kill, rape, control.”

Trump grew up not far away in Queens and was horrified to hear about the extreme gang violence in Long Island. Since early 2016, 17 people have been violently murdered in Long Island by MS-13 gang members.

The gang’s rampant growth in the United States is linked closely to a massive wave of unaccompanied minors illegally crossing the country’s border. Some 150,000 illegal minors were settled across the country during the Obama administration, Trump said, and 4,000 of them went to Long Island. Once settled, these minors become prime recruitment targets for MS-13.

Police arrested 17 MS-13 gang members in Long Island on a dozen murder charges and other violent crimes on July 19.

“They’re animals,” Trump said. “They don’t like shooting people because it’s too quick. … They like to knife them and cut them because that way it’s more painful.”

Trump used a large portion of the speech to galvanize police and immigration enforcement agents nationwide who have long been hamstrung at the federal, state, and local levels by Democratic officials who impose an open door policy for illegal immigrants and demonize police with a racial bias narrative, that often proves false when faced with statistics and reality on the ground.

“We love our police, we love our sheriffs and we love our ICE officers and they have been working hard.” Trump said. “You’re saving American lives every day and we have your back 100 percent.”

In New York City, Mayor Bill de Blasio is largely disliked by the police rank-and-file because he backed policies like ending stop-and-frisk, which they say has made law enforcement harder and cast police as wrongdoers in the public eye.

“I’ve met police that are great police that are not allowed to do their job because they have a pathetic mayor or a mayor that doesn’t know what’s going on,” Trump said to a rowdy applause, cheers, and whistling.

“Were you applauding for someone in particular?” Trump asked prompting a wave of laughter.

Sanctuary cities like New York openly impose policies on courts, jails, and police that protect illegal immigrants from arrest by federal authorities. Trump criticized sanctuary policies, saying that his administration is working to counter them.

Fighting illegal immigration was one of the key themes of Trump’s 2016 presidential campaign. His bold promises to build a border wall with Mexico, crack down on gang crime, and root out radical Islamic terrorism stirred up a silent American majority, leading him to a stunning election victory.

Trump has been largely successful just six months since taking office. Illegal border crossings are down 78 percent, he said. And the House just approved $1.6 billion in funding for the border wall.

Immigration and Customs Enforcement has also ramped up pressure on the MS-13 gang, deporting more than 2,700 criminal gang members in fiscal 2017, up from 2,057 the entire previous fiscal year, the White House has said.