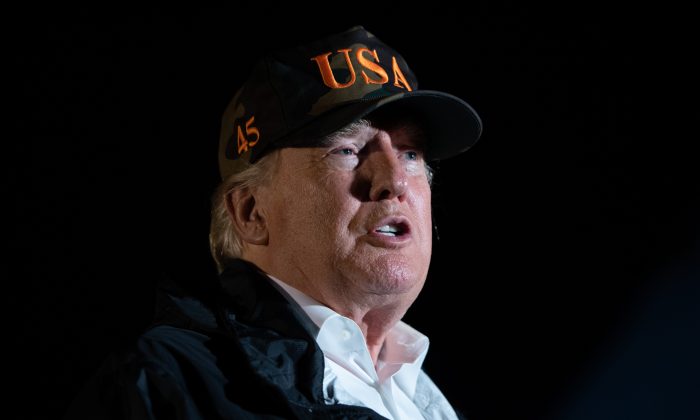 President Donald Trump speaks to the media prior to boarding Air Force One before departing from Naval Air Station Point Mugu in California on Nov. 17, 2018. (Saul Loeb/AFP/Getty Images)
Trump Administration

Trump highlighted the relevant provisions in the Farm Bill that would make it easier for federal agencies to clean up diseased and insect-infested trees from federal forests. It would also allow counties and tribes to manage national forests, a program already enabled for states.

The bill’s House and Senate versions have already passed, but still need to be reconciled.

California has been ablaze like never before. As firefighters gradually bring the large Camp Fire in the north under control, almost 1.7 million acres—nearly half the size of Connecticut—have been scorched by wildfires across the state this year.

It hasn’t always been this way. California actually used to see many more fires than in recent years—about 50 percent more in the 1980s than in the past decade. But they used to be much smaller. The 10-year average burned acreage increased over 150 percent since the 1980s.

Nearly all, 16 out of 20, of the state’s largest wildfires have occurred in the past two decades (pdf).

Trump has repeatedly asserted the main reason is poor forest management. Not a new idea, in fact.

“Years of fire suppression and other management practices have resulted in increased undergrowth and tree density (both live and dead) creating high fuel levels that have in turn contributed to high-intensity fires that have threatened property, natural resources, and the public,” the Agriculture Department stated in a 2014 factbook (pdf).

California forests used to be much thinner, according to several readers of George Gruell, retired wildlife biologist for the U.S. Forest Service, and his 2001 book “Fire in Sierra Nevada Forests: A Photographic Interpretation of Ecological Change Since 1849.”

As some Gruell’s readers and others have pointed out, small wildfires would break out naturally in the region, such as by lightning, or were started intentionally by Native Americans to clear the underbrush. Full-grown trees could withstand such fires, only losing their lower branches.

As the population increased, however, Californians suppressed the wildfires, while harvesting and replanting the trees for timber. The forests got thicker, but the harvesting-replanting cycle ensured continuous management.

That changed in the 1990s, according to Chuck DeVore, former California legislator now with the Texas Public Policy Foundation, a conservative think tank.

“In 2005 while a freshman California Assemblyman, I had the chance to visit Northern California and meet with the forest product industry professionals who grew, managed, and harvested trees on private and public lands,” DeVore said in a July Forbes article. “They told me of a worrisome trend started years earlier where both federal and state regulators were making it more and more difficult for them to do their jobs.”

Interior Secretary Ryan Zinke blamed the roadblocks to forest management on some environmental groups in a Nov. 20 call with reporters.

“Every time there’s a thinning project out, who’s suing?” Zinke said. “Radical environmental groups would rather burn down an entire forest than cut down a single tree.”

There have been 38 lawsuits over the federal government’s 576 forest management decisions involving California from 2009 to 2017, said Randi Spivak, lands director for the Center of Biological Diversity, an environmental group that has sued the government over forest practices.

The opposition goes beyond lawsuits though. In August, California Gov. Jerry Brown proposed allowing landowners to cut larger trees without obtaining a logging permit in exchange for thinning the forest and removing dead wood. Because cleaning dead wood costs money, the idea was to allow the landowners to recoup costs by felling some trees for timber. Logging would normally require a permit process so burdensome, professionals charge tens of thousands to prepare the paperwork.

Brown’s proposal was opposed by more than a dozen environmental groups, Santa Cruz Sentinel reported. It now appears to be dead in the water.

Correction: The article was updated to reflect that the author didn’t have access to George Gruell’s book “Fire in Sierra Nevada Forests: A Photographic Interpretation of Ecological Change Since 1849.”