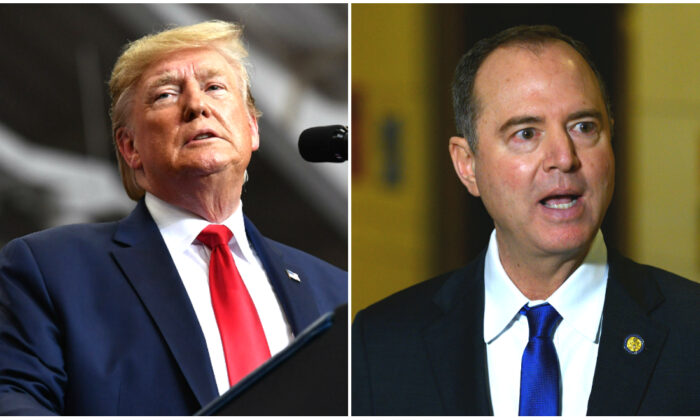 (L) President Donald Trump at a rally at the Civic Center in Monroe, Louisiana on Nov. 6, 2019. (Mandel Ngan/AFP via Getty Images). (R) U.S. Representative Adam Schiff, Democrat of California and the Chairman of the House Permanent Select Committee on Intelligence speaks to the press on Capitol Hill in Washington, on Nov. 4, 2019. (Andrew Caballero-Reynolds/AFP via Getty Images)
Politics

The first public impeachment inquiry hearings are to start in the U.S. Capitol building on Wednesday morning, prompting President Donald Trump to write several tweets ahead of time.

“READ THE TRANSCRIPT!” he wrote about an hour and a half before the hearings are to being, referring to a White House-released transcript of the phone call between him and Ukraine President Zelensky. House Democrats have said the phone call, where Trump asked his Ukrainian counterpart to look into Joe Biden and his son, as well as depositions from bureaucrats who dealt with Ukraine, are evidence that Trump misused his office.

Trump has denied the allegations numerous times, saying there was no quid pro quo involved.

“NEVER TRUMPERS!” was what Trump also wrote on Twitter, suggesting that the officials set to testify hold biases against him.

The two officials who are set to testify on Wednesday are William Taylor, the charge d’affaires in Ukraine, and George Kent, the deputy assistant secretary in Washington. The first testimonial is set to start at 10 a.m. ET.

The U.S. Constitution sets a vague but dramatic bar for impeachment, and it’s not clear if the allegations met the threshold for what the Constitution calls “high crimes and misdemeanors.”

“These hearings will address subjects of profound consequence for the Nation and the functioning of our government under the Constitution,” said Rep. Adam Schiff (D-Calif,), the chairman of the Intelligence Committee leading the inquiry, who wrote to other Congressmen.

Schiff called it a “solemn undertaking,” and said that colleagues need to “approach these proceedings with the seriousness of purpose and love of country that they demand.”

In another memo (pdf) to the panel’s members on Tuesday, Schiff said that ethics violations could be brought up against lawmakers who name the whistleblower at the center of the impeachment investigation. He also warned, without elaborating, on mentioning “debunked conspiracies” about the Bidens.

Schiff wrote that “it is important to underscore that the House’s impeachment inquiry, and the Committee, will not serve as venues for any Member to further the same sham investigations into the Bidens or into debunked conspiracies about 2016 U.S. election interference.” His memo didn’t elaborate on the “debunked conspiracies” or “sham investigations.”

The committee, Schiff added, “has a long, proud, and bipartisan history of protecting whistleblowers—including from efforts to threaten, intimidate, retaliate against, or undermine the confidentiality of whistleblowers.”