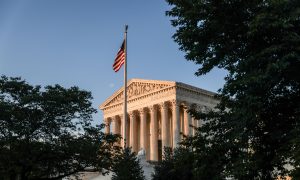 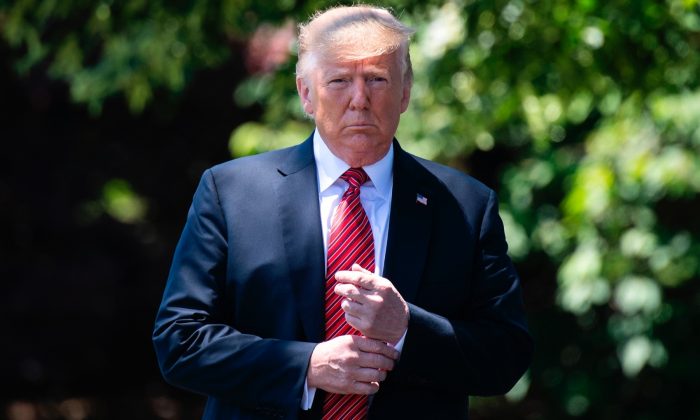 President Donald Trump walks out of the Oval Office to speak with reporters at the White House on June 11, 2019. (Jim Watson/AFP/Getty Images)
Trump Administration

President Donald Trump is being urged by some allies to ignore a recent Supreme Court ruling that blocked his administration from placing a question about whether the respondent is an American citizen on the 2020 census.

The question was on the census, which is conducted once a decade, for centuries until it was removed in the 1950s.

Supreme Court justices didn’t rule out allowing the question but said in a 5-4 ruling that the administration, which cited the Voting Rights Act, didn’t provide adequate justification for including the question on the census.

After reports that Trump was mulling an executive order, Rep. Chip Roy (R-Texas) said that the president should ignore the court and include the question, arguing that the court’s opinion, authored by Chief Justice John Roberts, didn’t preclude it from being included.

Absolutely. It’s the lawyers advising him. @realDonaldTrump should ignore them. Completely. Print the census with the question – and issue a statement explaining why – “because we should.” Done. https://t.co/ExyvRAmzoN

We honor the Constitution… and if you read it & the SCOTUS opinion you will see the question most certainly can be included.

“It’s the lawyers advising him. @realDonaldTrump should ignore them. Completely. Print the census with the question—and issue a statement explaining why—’because we should.’ Done,” Roy said.

“Neither the Constitution nor the Roberts opinion say the question cannot be included,” he added. “The President can add it & SCOTUS didn’t say otherwise—just that it wanted a better rationale than Commerce gave… so POTUS ought to do that.”

Rob Henneke, general counsel at the Center for the American Future, told Roy he agreed.

“SCOTUS ruling doesn’t block question—it merely requires Administration to put more information in the record supporting the basis for asking the question. Any current internal deadlines may be extended. It’s more important to get this right,” Henneke wrote on Twitter.

True statement. SCOTUS ruling doesn’t block question – it merely requires Administration to put more information in the record supporting the basis for asking the question. Any current internal deadlines may be extended. It’s more important to get this right.

Roy added in an op-ed that adding the question is important.

“Getting an accurate counting of persons, and citizens, is important for re-districting, for allocation of federal dollars, for setting up voting locations, for making decisions about the impact of illegal immigration on American communities, and for, yes, administering the laws in accordance with the Voting Rights Act, among other reasons. It is also, arguably, constitutionally required to ask for citizenship. Yes, required,” he wrote.

“If one only reads the census portion of the Constitution, it references counting ‘persons.’ Fair enough, but there is no restriction on counting citizens, too. Importantly, though, if one reads section 2 of the 14th Amendment, you find that it, combined with the later passed 19th and 26th Amendments, creates a requirement that we know the total number of voting-age ‘citizens’ in each state. This provision was to ensure enforcement of voting rights, and if you do not have citizenship data by state, you cannot enforce that section of the Constitution.”

After the Supreme Court blocked the citizenship question, Secretary of Commerce Wilbur Ross said the department was printing the census without it.

“The Census Bureau has started the process of printing the decennial questionnaires without the question,” Ross said in a statement. “My focus and that of the bureau and the entire department is to conduct a complete and accurate census.”

But Trump called news reports about his administration giving up on the effort to place the question “fake,” adding on July 3: “We are absolutely moving forward, as we must, because of the importance of the answer to this question.”

Lawyers at the Department of Justice told a federal judge that day that they may have identified a “legally available path” forward, though they didn’t get into specifics.

The lawyers were ordered to give the judge, U.S. District Court Judge George Jarrod Hazel, an update by Friday. Trump said on July 4 that government employees were working on the issue through the holiday.

Denying a request to move the date to Monday because of the July 4 holiday, Hazel noted the unusual nature of the situation.

“I’ve been told different things, and it’s becoming increasingly frustrating. If you were Facebook and an attorney for Facebook told me one thing, and then I read a press release from Mark Zuckerberg telling me something else, I would be demanding that Mark Zuckerberg appear in court with you the next time because I would be saying I don’t think you speak for your client anymore,” he said.