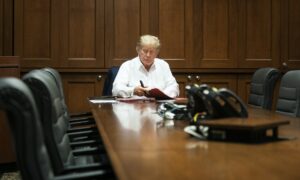 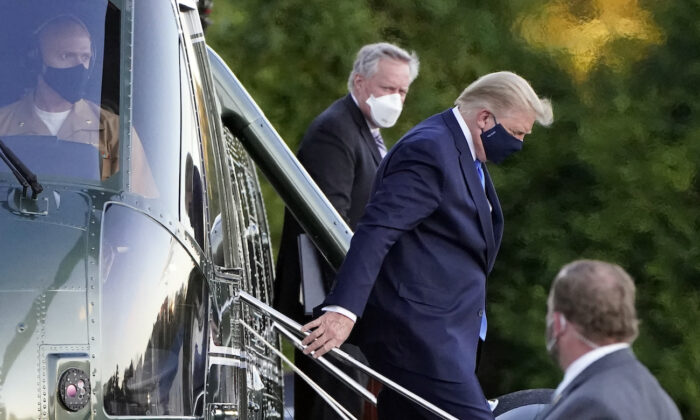 White House doctor says he 'continues to do well, having made substantial progress'
By Jack Phillips
Print

President Donald Trump’s campaign adviser Steve Cortes said on Sunday that the president is “upbeat and assertive as ever” after he was diagnosed with COVID-19.

“He’s doing well … We spoke to the president yesterday, we meaning senior campaign staff … He was as upbeat and assertive as he’s ever been,” Cortes said, according to Fox News.

Cortes said that the video that Trump released on Saturday night shows Trump is a “fighter speaking directly to the American people extemporaneously for four minutes,” adding that he is “looking good” and “sounding good and of course most importantly of all we know what his doctor said which is his progress has been incredible.”

Cortes added: “This president is going to recover, we are highly confident of that.”

“There is not one even iota of the president feeling sorry for himself,” Cortes said after speaking with Trump over the phone. “He said we are going to win this campaign. He is still governing actively as President of the United States even from the hospital. We are fully confident that his recovery will be complete.”

“Trump continues to do well, having made substantial progress since diagnosis,” Conley wrote. “This evening he completed a second dose of Remdesivir without complication.”

Conley said Trump is “fever-free and off supplemental oxygen,” spending most of the afternoon working. “While not out of the woods, the team remains cautiously optimistic,” he added.

On Sunday, the plan is to observe in between doses of Remdesivir, he said.

The White House has said Trump will work in a special suite at the medical center for the next few days as a precautionary measure. He had no public events scheduled on Saturday.

In a video address on Saturday, Trump said, “I’m starting to feel good … I just want to be thankful for the support I’ve seen,” he said, adding that he is “most appreciative” of the well-wishes from the “American people.”