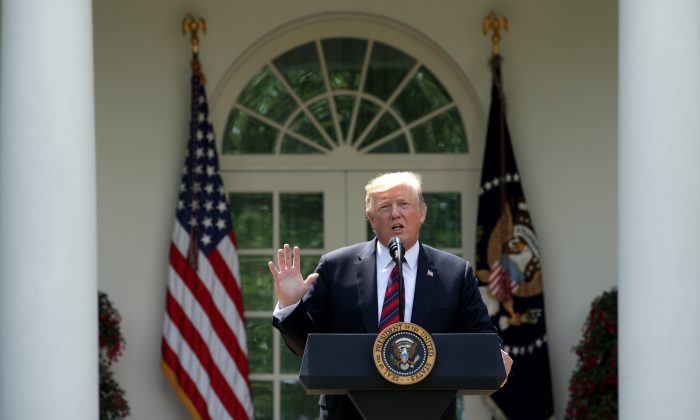 President Donald Trump speaks about immigration reform in the Rose Garden of the White House on May 16, 2019. (Alex Wong/Getty Images)
Trump Administration

President Donald Trump introduced his administration’s proposal for a major overhaul of the legal immigration system on May 16, outlining a legislative package that would prioritize migration based on skill and merit.

The proposal doesn’t change the number of people who obtain permanent residency on an annual basis. The measure instead focuses on the kind of migrants eligible for permanent resident status, by shifting away from the random visa lottery and limiting the kinds of relations eligible for legal migration through family ties.

Trump proposed to replace the visa lottery system with a merit-based approach that is already being used in countries such as Canada and New Zealand. The new points-based system would rank candidates based on age, level of education, and technical skills. The system would award points for migrants who are qualified for high-wage jobs, have job offers in the United States, or have plans to create jobs in the country.

Future immigrants also will have to demonstrate financial self-sufficiency, knowledge of the English language, and pass a civics exam.

“Our proposal fulfills our sacred duty to those living here today while ensuring America remains a welcoming country to immigrants joining us tomorrow. We want immigrants coming in,” Trump said.

The proposal is calibrated to have a chance of passage in the House, where Democrats have obstructed every one of Trump’s immigration reforms. The president said that if the Democrats block the bill, he would work to pass the bill when Republicans reclaim the House in 2020.

“But wouldn’t it be nice to do it sooner than that?” Trump asked.

Trump said he is open to additional proposals from Democrats and called on them to abandon politics for the good of the country.

“Many Democrats have claimed to be for these concepts at different times in their careers. And in many cases, in very recent history,” Trump said. “I hope that they will end up joining me and all of the people gathered together today in putting politics aside, putting security and wages first, and pursuing these historic reforms. It’s time.”

Under the current legal immigration system, 12 percent of immigrants receive permanent residency status based on skill and merit. The new proposal aims to increase the skill-and-merit ratio to between 57 and 60 percent.

To allow for the increase in merit-based migration, the administration will restrict the kinds of relations eligible for immigration through family ties. In his speech, Trump said that spouses and children would be given priority, suggesting that parents and siblings of U.S. residents would no longer be eligible for legal immigration under the new proposal.

“This is the most prized citizenship anywhere in the world by far,” Trump said.

The president made the announcement in the Rose Garden, in front of a large delegation of senior White House officials, heads of executive branch agencies, and lawmakers.

“It’s time to restore our national unity and reaffirm our national purpose. It is time to rebuild our country for all Americans. Together, we will create an immigration system to make America safer, stronger, and greater than ever before.”

In addition to reforms to the legal immigration system, Trump’s proposal includes measures to address the illegal immigration crisis on the southwest border. The measures include tougher vetting of asylum claims, and a comprehensive border security package, which includes funding based on fees collected at ports of entry and fixes to the legal framework that currently encourages illegal aliens to flood across the border.

“There is a crisis at our border and Congress needs to step up and act,” Rep. Mark Meadows (R-N.C.) said on Twitter. “President Trump today outlined a vision for a secure nation, a secure border, and a secure American workforce with policies that remove the incentives for illegal immigration.

“It’s time we fix this problem.”