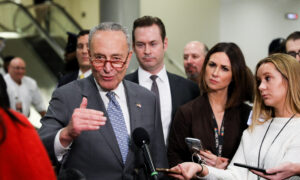 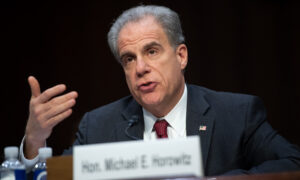 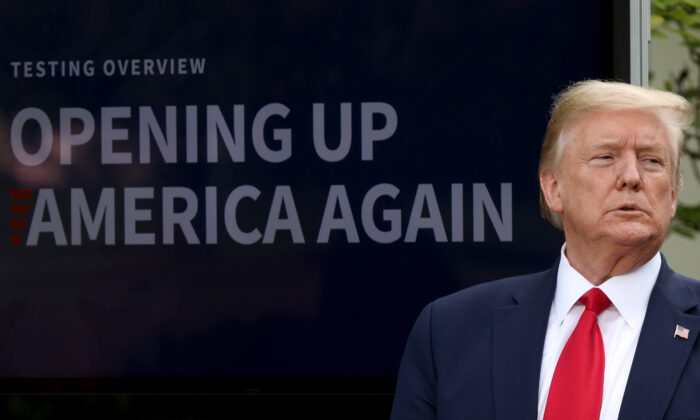 U.S. President Donald Trump participates in the daily briefing of the coronavirus task force in the Rose Garden of the White House in Washington on April 27, 2020. (Win McNamee/Getty Images)
Trump Presidency

President Donald Trump on Monday unveiled new plans to speed up and expand testing for the CCP (Chinese Communist Party) virus nationwide, as states move toward reopening their economies.

During a press briefing with the White House Coronavirus Task Force, the president said the White House had published two new documents—a CDC “testing overview” (pdf) and “testing blueprint” (pdf)—which layout plans to accelerate testing for the CCP (Chinese Communist Party) virus, commonly known as the novel coronavirus, which has been attributed to nearly 1 million infections across the U.S.

Battling against Democratic accusations that he has not done enough to expand testing, Trump brought on stage executives from major retailers that are having tests done on their properties and heads of companies that are producing testing equipment.

“We are continuing to rapidly expand our capacity and confident we have enough testing to begin reopening and the reopening process,” Trump told reporters. “We want to get our country open, and the testing is not going to be a problem at all.”

“In fact, it’s going to be one of the great assets that we have,” he continued.

The announcement comes as the administration faces pressure to increase testing capacity, seen as key to faster lifting of lockdowns.

The new strategy aims to help states expand testing capacity, and was developed with the U.S. Centers for Disease Control and Prevention (CDC) and the Food and Drug Administration (FDA). The guidance was coupled with announcements that hundreds of new testing sites would be opened by retailers, including Walmart Inc. and CVS Health Corp.

Senior administration officials said Monday that the federal government is sending enough swabs and related equipment to all 50 states to cover their entire testing objectives for May and June, Reuters reported.

This will allow all 50 states to screen at least 2 percent of residents, the officials said, speaking on condition of anonymity. Some 5.4 million tests have been conducted across the United States so far, according to the COVID Tracking Project, making up just 1.6 percent of the population.

One official said the White House intends to prioritize testing for the most vulnerable communities, including the elderly, Bloomberg reported.

Meanwhile, the CDC said Monday it would move to consider first responders and individuals living and working in nursing facilities, shelters, and prisons, who display symptoms consistent with the CCP virus, as a high priority for testing.

“We’re deploying the full power and strength of the federal government to help states, cities, to help local governments get this horrible plague over with,” Trump said.

White House coronavirus response coordinator Dr. Deborah Birx said at the briefing that the testing blueprint “… lays out the roles and responsibilities to enhance our partnership between the private sector and the public sector.”

It will bring together “state and local governments with the federal government to ensure that we can accomplish and achieve our core principles and objectives,” she added.

Birx said there are three parts to the strategy—the “robust diagnostic testing” of those who are unwell, the testing of vulnerable communities, and a “rapid response program” that would include contact tracing.

Ultimately, the aim is to “ensure that every symptomatic case and critically, the asymptomatic cases, are quickly tracked and traced to ensure that not only can we control this epidemic, but predict outbreaks before they expand,” she said.

The blueprint was swiftly met with criticism, with Sen. Patty Murray (D-Wash.) saying it “will accomplish nothing new.”