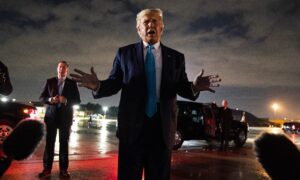 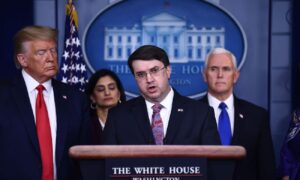 'I Judge a Man by His Actions': Veterans Affairs Secretary Backs Trump After Unsourced Atlantic Report
0 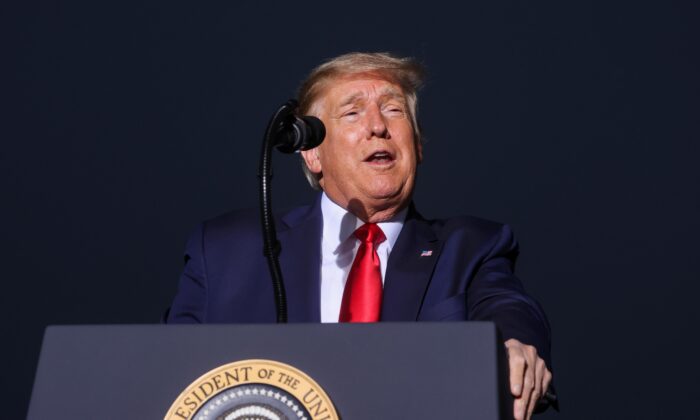 Trump Unleashes on Biden in Nevada After ‘Vicious Ad’

President Donald Trump gave a fiery campaign speech in Minden, Nevada, on Sept. 12, saying that he doesn’t “have to play nice anymore” after the Biden campaign released an unsourced campaign ad claiming Trump said “unthinkable” things about U.S. soldiers while standing over their graves.

“He put the most vicious ad,” Trump told thousands of supporters gathered at Minden airport as the president tours the state as part of his “Great American Comeback” campaign.

“There’s nobody who loves and respects our military more than me,” Trump said. “We have 25 people, witnesses, on the record already and they’ve said that never took place. Never took place. And yet pathetic Joe … no sources, no nothing.”

Just landed in Nevada but while on Air Force One watched most vicious TV commercial I have ever seen. Pathetic Joe’s people placed an unsourced ad where they have me saying unthinkable things about soldiers while standing over their graves. It is a MADE UP LIE. A TOTAL CON JOB!

Trump joked that although he knows “some of the worst people in the world,” pointing to real estate developers in New York, none of them would say what Biden’s ad had him say standing on top of the graves of dead American soldiers.

“So now we can play it like it is. Let’s face it, Joe is shot,” Trump said, adding that if Biden gets elected as president, “he’ll just be locked up in a room someplace, and the radical left is going to be running our country.”

Trump also dedicated some of his speech to criticizing Democrat-run states for pushing universal mail-in ballots.

“The Democrats are trying to rig this election. That’s the only way they’re going to win it,” he said.

He called out Nevada’s Democratic Gov. Steve Sisolak for trying to stop Trump campaign events due to risk of COVID-19 transmission. Nevada reported 10 deaths and 414 new cases of COVID-19 on Sept. 12.

“But think of this,” Trump told his supporters. “He’s in control of millions of votes. Here’s a guy calling venues, telling them not to have the rally, calling different venues.

“This is the guy that we’re entrusting with millions of ballots, millions of unsolicited ballots. … He can rig the election.”

“At every single place in the last year, tiny amounts, a congressional race in New York, a small number of votes … look at some of these races, every one of these races was a fraud, missing ballots. And I don’t mean like 1 percent, I mean like 20 percent, 25 percent.”

Trump said he supported a mail-in voting system where individuals have to register to be sent a ballot. “That’s where you ask for it; you have to sign papers.”

Before the rally, Trump’s motorcade passed through 40 miles of roads from Reno to Minden that were lined with supporters. The event, which was originally scheduled for Reno-Tahoe International Airport, had to be moved last minute after the airport authority decided the event would be in violation of Sisolak’s emergency directive for COVID-19.

Douglas County then agreed to host the event at Minden-Tahoe Airport.

“I am proud and amazed by the quality and professionalism of everyone involved,” Douglas County Manager Patrick Cates said in a statement. “Our outstanding team of county agencies and first responders worked with the Secret Service to organize plans for a safe and secure event within 48 hours. We consider Douglas County fortunate to have the opportunity to host any president or presidential candidates and to listen to what they have to say about the future of our great nation.”

Republican Chairman Michael McDonald accused Sisolak of setting a double standard for Republicans and others who want to stage protests, including Black Lives Matter. He said the 50-person limit hasn’t been enforced at those events.

Earlier Sept. 12, the president participated in roundtable events with supporters at the Trump International Hotel in Washington, D.C.

Trump held a roundtable in Las Vegas on Sept. 13 with Latinos for Trump at the Treasure Island Hotel & Casino on the Strip, and will continue on to Henderson for a “Great American Comeback” speech around 7 p.m. at Xtreme Manufacturing.

Nevada is considered a swing state. Trump narrowly lost Nevada to Clinton in 2016.