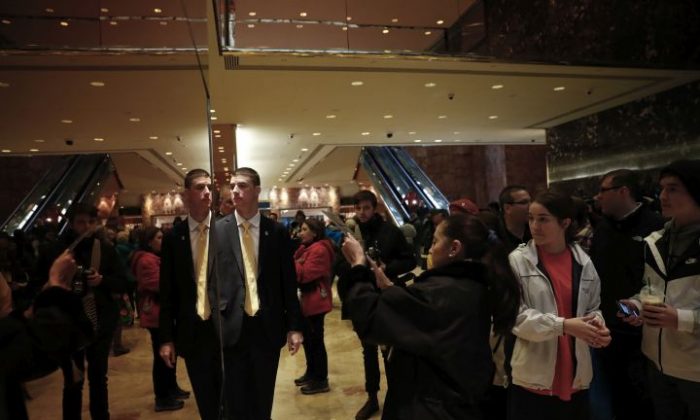 Tourists, pedestrians and security gather in the lobby of Trump Tower in New York, Monday, Nov. 21, 2016. Welcome to Trump Tower. Upstairs, the President-elect is planning his administration. Downstairs it’s a full-on political carnival. Since Donald Trump’s stunning presidential victory, the celebrity businessman has largely been ensconced in his penthouse home at his 664-foot glass tower on Manhattan’s Fifth Avenue. But as he works, the political circus that has accompanied his spectacular rise unfolds in the building’s marble-floored, gold-plated public lobby before crowds of journalists, supporters and wide-eyed gawkers. (AP Photo/Carolyn Kaster)
Politics

Trump Tower becomes a' political sideshow'
By The Associated Press

Since Donald Trump’s stunning presidential victory, the celebrity businessman has largely been ensconced in his penthouse home at his 664-foot glass tower on Manhattan’s Fifth Avenue. But as he works, the political circus that has accompanied his spectacular rise unfolds in the building’s marble-floored, gold-plated public lobby before crowds of journalists, supporters and wide-eyed gawkers.

One afternoon, a man came into the lobby, did a series of handsprings and shouted “Wu Tang!” before he was escorted out by security.

Trump spent the weekend at his home in Bedminster, New Jersey, and is headed to his Mar-a-Lago resort in Florida for Thanksgiving. But since the election, most days have begun at 8 a.m. with the opening of Trump Tower, which is surrounded by a maze of metal barricades, security checkpoints and policy officers. Dozens of journalists file into the building, setting up cameras in a velvet-roped area across from the golden-doored elevators to stake out the transition. They document everyone from Vice President-elect Mike Pence to Trump’s adult children and possible appointees, shouting questions and snapping photos.

Sometimes the visitors send signals about whether they are being considered for top administration posts. Sometimes people come and chat with the press, as Conway does regularly. Sometimes the delivery of a stack of pizzas prompts discussion about what’s going on upstairs.

At times the situation descends into the farcical. Because the building has multiple entrances, people can get in and out without going past the press in the lobby. Including, as it turns out, the future president. Last week, Trump ditched the press to go to a private dinner with his family, prompting a mad Manhattan dash from reporters trying to catch him. Ultimately, some had to watch the door of the restaurant from behind a dumpster.

To be sure, it’s not just the press hanging out at Trump Tower. As the day wears on, supporters and gawkers start trickling in, armed with selfie sticks and “Make America Great Again” hats, dawdling in the lobby or sitting in a Starbucks that overlooks the main entrance.

For visitors bored with standing around, they have a whole world to explore. There’s the waterfall that cascades down the back of the lobby and the Trump Bar and shopping on the lobby level. There’s a Nike and Gucci store. And in the basement, there’s a Trump Cafe, a casual pizza and sandwich stand, the Trump Ice Cream Parlor and the Trump Tower Restaurant.

Most popular is the stand selling Trump shirts and hats on the basement level. Last week, it sold out of the red “Make America Great” cap.

Some gawkers had come a long way.

“We’ve been watching this on TV and wanted to be part of the fun,” said Art Miller, 58 of Blairsville, Georgia, a retired firefighter in New York City for the weekend with his wife and another couple. “Donald is busy right now so he couldn’t see us.”

Texas Judge at Citizenship Ceremony: ‘Go to Another Country’ If You Don’t Accept Trump

Others were local, like Barry Shain, 58, of New York City, who said he and his wife and son were “playing tourist.” A Trump supporter, Shain said the country “dodged a bullet.”

Of course, not all of the onlookers are Trump backers.

Mukesh Balsara, 47, who snagged a photo with Conway, said “she’s a very interesting lady. She turned it around for him.” Balsara, originally from England, didn’t vote because he is not a citizen, but he said of Trump: “I’m not a fan.”

Visiting from Seattle, Holly Roe, 63, voted for Hillary Clinton, but was taking in the scene at the tower. “This is kind of an interesting time to be here,” she said. “This is where the action is.”