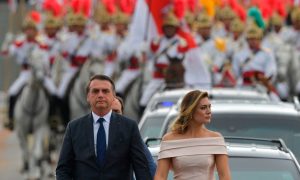 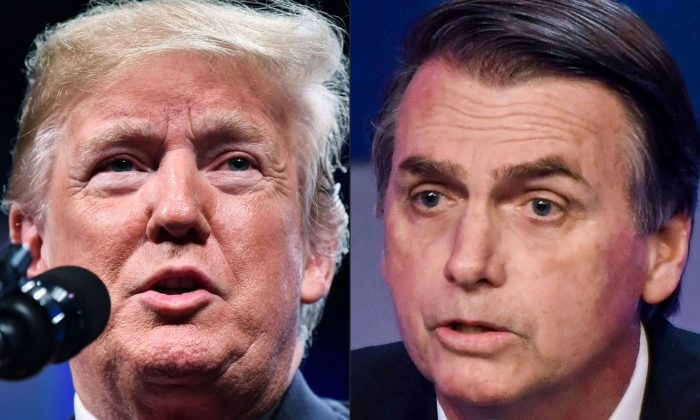 The White House said on March 8 that the two leaders would also talk about providing humanitarian assistance to Venezuela and helping the locals restore democracy in their country when they meet on March 19.

Bolsonaro, who took office Jan. 1, is a former army captain with conservative, anti-socialist positions. He has often expressed admiration for Trump and said he planned to emulate several of the U.S. leader’s policies.

In a phone call after Bolsonaro’s election victory in October, they spoke of “a strong commitment to work side by side” on issues affecting their countries.

Even before taking office in January, Bolsonaro had already pledged to oppose the government of Venezuela, where an economic crisis had caused millions of people to flee, many to neighboring Brazil.

Since taking power, Bolsonaro has stepped up criticism of Venezuela’s illegitimate government lead by socialist dictator Nicolas Maduro and has recognized interim President Juan Guaido as the people’s chosen leader of the OPEC member nation.

The United States has also recognized Guaido as president and called on others to do the same. Washington has increased sanctions against Venezuela in a bid to oust Maduro.

Bolsonaro rose to power on an anti-crime and anti-corruption agenda that has energized conservative supporters after four consecutive presidential election wins by the socialist Workers’ Party.

The lawmaker said in his acceptance address that he’ll govern Brazil according to the Bible and the country’s constitution.

Bolsonaro Steers the Ship Away from China, Russia

In a nod to the Trump administration, Bolsonaro has vowed to end what was an open-arms approach by Brazil to the China under the Chinese Communist Party.

Ten months before he was catapulted to the presidency, Bolsonaro made a bold visit to Taiwan in February 2018. The trip was not received well by Beijing as the first time a Brazilian presidential candidate had visited the island since the 1970s, when Brazil cut ties with Taiwan.

As part of his campaign message, Bolsonaro made clear that he thought China was a great threat to Brazil’s sovereignty. “China isn’t buying in Brazil—it is buying Brazil,” he said at the time, hinting at China’s purchasing of firms in strategic energy sectors.

Since Bolsonaro took office, Brazil has made a marked foreign policy shift away from China and Russia towards the United States. Bolsonaro has promised to counter the CCP’s influence in the country, withdraw Brazil from the U.N Human Rights Council, close the Palestinian embassy in Brasilia, and move the Brazilian embassy in Israel to Jerusalem from Tel Aviv. Bolsonaro is scheduled to visit Israel from March 31 to April 4, according to Israel’s Foreign Ministry.

Bolsonaro Vows to ‘Tackle the Marxist Garbage’ in Brazil’s Schools

In a pair of his first policy-oriented messages as the president, Bolsonaro said his administration will target the “Marxist garbage” within his country’s education system.

Bolsonaro issued the messages one day after declaring in his inaugural speech that his election victory liberated Brazil from “socialism and political correctness.”

“One of our strategies to get Brazil to climb from the lowest spots of the educational rankings is to tackle the Marxist garbage in our schools head-on,” Bolsonaro wrote on Twitter. “We shall succeed in forming citizens and not political militants.”

One of our strategies to get Brazil to climb from the lowest spots of the educational rankings is to tackle the Marxist garbage in our schools head on. We shall succeed in forming citizens and not political militants.

In a follow-up message, he wrote that his administration will focus on the opposite of the previous government, “which purposely invested in the formation of slave minds of the ideas of socialist domination.”

Bolsonaro’s decision to tackle the system likely isn’t accidental. The international communist movement selected Brazil’s education system as the primary target for infiltrating the nation, according to Jeff Nyquist, an author who has interviewed experts on the issue in Brazil and the United States.

Reuters, The Associated Press and The Epoch Times reporter Ivan Pentchoukov and Fergus Hodgson contributed to this report.